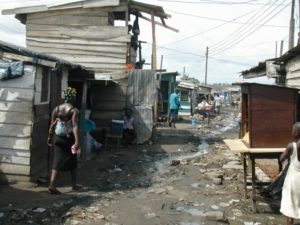 Ghana has the world’s largest manmade lake and the 1-gigawatt Aksombo Hydroelectric Plant, built to supply electricity to Africa’s largest aluminum smelter. But the smelter has been idle since 2009, a casualty of low aluminum prices and persistent electricity shortages that have forced the government to divert the power elsewhere.

Ghana is a typical example of the world’s worst-managed economies: It’s a country that shouldn’t be poor, but it is. The West African nation’s gross domestic product per capita fell 9% last year to US$621, ranking it 154th out of 184 countries tracked by the International Monetary Fund, below resource-impoverished Haiti. With a US$3 billion trade deficit last year and $4.9 billion in external debt, Ghana is struggling to pay its bills even as it sits on some of the world’s biggest reserves of gold and bauxite, as well as considerable amounts of offshore oil, which is being developed by Anadarko Petroleum and others.

As the world focuses on Greece and the rest of the so-called PIIGs–Portugal, Italy and Ireland–in their fight to reverse years of irresponsible fiscal policies, another group of nations make them look positively well-managed. Forbes screened IMF data for countries that have low and declining per-capita GDP, high trade deficits and high inflation, all indicators of bad economic management regardless of the country’s inherent wealth.

All have at least one trait in common: Their governments discourage private investment–and economic growth–through policies of crony capitalism, expropriation or arbitrary enforcement of the laws. That makes it hard to generate hard currency to pay off government debt and discourages citizens from investing in education to improve their own economic lot.

“Most of these vulnerably low-income countries are in a trap,” said Otaviano Canuto, vice president and head of the World Bank’s Poverty Reduction and Economic Management Network. “The climate is not conducive to investments, not only in factories and agricultural improvements, but in education.”

No surprise as to the winner of this race to the bottom: Zimbabwe, a country where the annual inflation rate hit the surreal level of more than 500 billion percent in late 2008 as the government of dictator Robert Mugabe tried to print his way out of his own mistaken economic policies. Before the fever broke last year, Zimbabwe restaurants felt compelled to post signs reminding patrons not to use the nearly worthless dollar bills as toilet paper. Zimbabwe’s inflation rate has since dropped to around 5% as the country abandoned its currency and allowed transactions to be conducted in U.S. dollars and other currencies. But it still was forced to import 500,000 tons of maize last year to make up for shortfalls in its once-bountiful agricultural sector.

Ranking fifth on the list is Nicaragua, the only Latin American country to show such a poisonous combination of poverty and stagnant growth. Nicaragua’s inflation-adjusted GDP fell 1.5% in 2009 and foreign investors have shunned the country since 1980s socialist President Daniel Ortega returned to office in 2007. Textile manufacturers have closed and European aid agencies balked at supporting the Ortega government after flawed elections in 2008. One reliable source of income in this socialist paradise: remittances from expatriates, which represented 13% of GDP in 2008.

In eighth place is Liberia, another resource-rich nation that has mismanaged its way to poverty through decades of corruption and civil war. The country has been relatively stable since 2005 and may achieve 6% GDP growth this year. But that’s a GDP of less than $900 million, with rubber exports the single largest source of foreign currency at $170 million. Registrations of foreign ships brings in another $18 million, hardly enough to make a dent in the country’s US$3.4 billion debt. Last year commercial creditors agreed to call it even at 3 cents on the dollar, possibly allowing Liberia to begin the cycle of borrowing and defaulting anew. Some economic growth is expected after Arcelor Mittal begins shipping iron ore from the Yekapi complex in 2011.

Eritrea also has a history of war, which might explain its per-capita GDP of US$363, ranking it 176th out of 185 countries and seventh on Forbes’ list of the world’s worst economies. Bad government plays a role, too. The agricultural sector employs 80% of the workers in this East African state, which gained independence from Ethiopia in 1993, but generates only 12% of GDP. The ruling PFDJ party has “imposed an arbitrary and complex set of regulatory requirements” that discourage foreign and domestic investment, and frequently expropriates property, the U.S. State Department says.

“Poverty by itself is not a sufficient condition for conflict,” said Canuto of the World Bank. “But whenever you have a situation of conflict and poverty together, the country is trapped.”

Sixth-place Burundi, like many of the countries on this list, has another big problem: bloated government payrolls. The IMF estimates government wages account for 12% of GDP, but 63% of the population remains undernourished. The country, still recovering from years of civil war, needs $5.8 billion in infrastructure but will be hard-pressed to pay for it with just $68 million in exports–most of it coffee–and $275 million in imports last year. A 24% domestic inflation rate doesn’t help.

The global financial crisis does offer some signs of hope that perennially mismanaged countries can change their ways. Other than Nicaragua and Venezuela, most of the Latin American nations muddled through the crisis without their historical reliance on hyperinflation and default.

“That had a lot to do with macroeconomic policies,” said Canuto, who cited Mexico, Brazil and Uruguay as being particularly well managed. “Latin America has learned a hard lesson on the benefits of cutting this serial default behavior.”