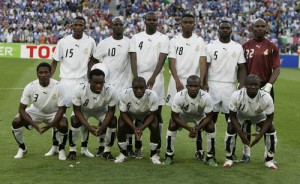 The letter read that Pappoe â€œwill be coming to Namibia soon to see if the Black Stars could stay there (here) to prepare for their African Cup of Nations in Angola.â€ Muinjo responded saying Ghana has a â€œhuge following in Namibia with its top international players.â€

Ghana boasts the quality of Chelseaâ€™s Michael Essien and Stephen Appiah among others and Pappoe has informed NFA that GFA â€œwill revert back in the next few days to let (Muinjo) know our travel plans to visit Namibia and also look at the facilities on offerâ€.

Namibia is looking for a team to play on August 12, a FIFA date of international friendlies in Windhoek. Initially Malawi and Mozambique, who are still in the World Cup qualifiers, had approached Namibia for a match in their countries but NFA is giving special preference to teams who want to play in Windhoek.