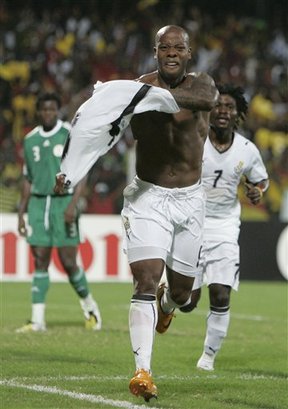 Ghana served their intention of clinching their 2010 World Cup ticket after thumping southern Africa giants Zambia 4-1 in a friendly in London on Wednesday. The game which was meant to be next monthâ€™s World Cup warm-up for both sides turned out to be a stroll in the park for the Black Stars. Ghana wrapped up the win before the break but maintained their desire to score more goals in the second half.

Even though Chipolopolo improved massively later in the game their defenders found it difficult containing Swiss-based youngster Samuel Inkoom. Inkoom, playing in midfield for the first time in his career, showed no nerves when he started the move that resulted in the opener on 12 minutes.

The former Kotoko defender started a move on the right before releasing a precise pass to stand-in captain Michael Essien who laid it in the path of Sulley Muntari. The Inter Milan midfielder wasted no time in tapping the ball from three yards on to put the Ghanaians in the lead. Inkoom was again involved the second goal on the half hour mark as his surging runs on right caused major problems for the Zambians. The Switzerland-based defender was sent free on the right by Essien and Inkoomâ€™s piercing cross which a southern African defender turned into his own net.

The southern Africans rallied and pulled one back three minutes later when Inkoom was savagely brought down in the box by Dennis Banda. Banda was sent in the 43rd minute before Junior Agogo converted the resulting penalty two minutes before the break. But there was more time for Haminu Dramani to seal the fate of the Zambians one minute later when he was played in by Essien.

The Russia-based utility player was patient by wrong-footing goalkeeper Davy Kaumbwa and easily slotted home. The Zambians tried to impose their game on the Ghanaians just before the break but the central defence marshalled by Eric Addo and John Pantsil remained resolute. While returnee Francis Dickoh was jittery in the first half he settled well after the first half and Anthony Annan also having a quiet game. All the players on the pitch were also given the opportunity to impress and captain Stpehen Appiah got the loudest cheer when he came on as a substitute. Gladson Awako and David Telfer won their first caps later in the game and Kwame Quansah was also called into action to replace Essien. Chris Dickson also came on and William Amamoo also had the chance to impress Serbian manager Milovan Rajevac. Rajevac won the war of the sidelines as he outsmarted Frenchman Renard Herve with his tactics to the delight of Ghana. Herve was keen on seeing the back of Ghana as he was regarded as a physical trainer in his short stint with the Black Stars. The Black Starsâ€™ next World Cup Qualifier is against Sudan at home on 6 September.

The friendly win against Zambia, however, has provided Rajevac a good opportunity to see how his squad is shaping up for the upcoming qualifier.
Source: ghanasoccernet