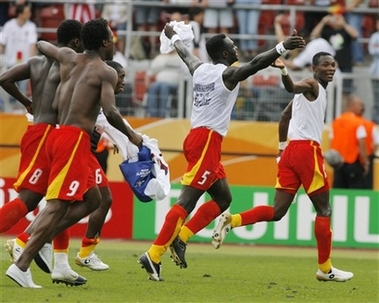 Ghana will playÂ Egypt inthe finalÂ of theÂ Africa Cup of Nationson Sunday in Angola.Â TheÂ Black StarsÂ reachedÂ the finalÂ on Thursday after defeatingÂ arch rivalsÂ Nigeria to seal their place.Â Egypt secured their third successive final spot after beating 4-0 in the other semiÂ final game.Â A first-half goal byÂ Asamoah GyanÂ earned Ghana a 1-0 win over Nigeria on Thursday and a place inÂ the finalÂ for the first time in 18 years.Â Gyan, who also scored the only goal in the quarter-final win over hosts Angola, headed home in the 21st minute.Â The Black Stars, who last won the continental tournament in 1982, will meet the holders in Sunday’s final at Luanda’s November 11Â stadium.