Ghana and the Netherlands are set to face-off on Saturday, May 31.

The game will be broadcast on Supersport 3 in Ghana and other African countries and SBS 6 in the Netherlands. 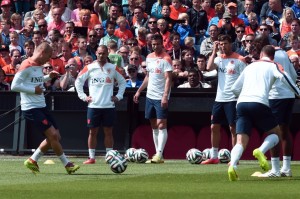 The game will also be broadcast on BeIN Sports in other African countries and many Middle Eastern countries, ESPN3 in the United States, and ESPN Play Latin America in Latin America.

The game at Stadion Feijenoord in Rotterdam is set to start at 6:30 p.m. GMT. Ghana coach Kwesi Appiah said in an interview posted ont he team’s website  that he’s not revealing his possible starting lineup for the upcoming World Cup, but will be trying to finalize it during these warm up matches.

Netherlands coach Louis van Gaal, meanwhile, has his players excited to try out the new 5-3-2 formation. Wesley Sneijder, for instance, told reporters that he feels good in the formation, both with and without the ball.

“Within a week I have seen a lot of progress. I’m really curious to see how we are going to play against Ghana. We can not expect 100 per cent perfection, so it still will not be all rosy,” he said, reported Sky Sports.

“But ultimately it is the first (World Cup) match against Spain soon and then we must be ready.”

The Netherlands starts its World Cup play on June 13 against Spain before taking on Australia on June 18 and Chile on June 23.

Ghana starts off on June 16 against the United States before taking on Germany on June 21 and Portugal on June 26.