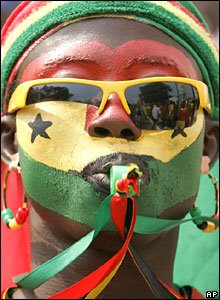 Cabinda, Angola, Jan. 13, GNA – It will indeed be a make or break affair for the Black Stars of Ghana and the Elephants of Cote d’Ivoire when the two sides clash in the Group B game of the 27th Edition of the Africa Cup of Nations at the Estadio Nacional De Chiazi, in Cabinda on Friday. For very good reasons the Ivorians will have to win the game to ensure their continuous stay in the competition after they were put to a pulsating goalless draw by Burkina Faso, a side they humiliated during the qualifying series.

This is because, it will be their last match in the competition after the group was reduced to three teams due to the withdrawal of Togo two days ahead of the event, coupled with the fact that the 2010 Nations Cup is seen as the last opportunity for the Didier Drogba led generation to win a silverware by connoisseurs of the game.

The Elephants again have to leave up to their pre-tournament billing as the favourites in the tournament taking into consideration the caliber of players at their disposal.

The Stars are definitely the underdogs in this situation, due to the mass injury that hit the team leading to the absence five key players including Skipper of the side, Stephen Appiah and his deputy John Mensah, John Painstil, Michael Essien and Anthony Annan as well as Sulley Muntari who was dropped on grounds of indiscipline.

However as indicated by the Stars coach Milovan Rajevic, he is less perturbed by the absence of these big stars because he has absolute confidence in the ability of his newly composed team made of young and upcoming stars and members of the 2009 FIFA World Under-20 World Champions to deliver.

For the coach, he is looking up to a squad made of players who are hungry for success and ready to go the extra mile to clinch victory for the nation.

He told the GNA Sports in an interview on Tuesday at Cabinda that playing against Cote d’Ivoire is not about names but the ability to build a winsome side that will match the Ivorians boot for boot.

There is therefore no doubt that Ghana will be on the path of an entry into the next stage of the competition, if they are able to pick the three maximum points at stake as any result in the next game against Burkina Faso will see them through to the next stage.

In addition, GNA Sports gathers that the camp of the Ivorians is confronted with problems bothering on personality clash and petty indiscipline and this could work in favour of the Ghanaians, if it is indeed true and have any impact on the performance of the western neighbours of the Ghanaians in the Sub region.

But victory will definitely not come on a silver platter but with a great challenge from the Ivorians as elimination seem to be starring at them after their goalless drawn game against Burkina Faso.

However the headache of the technical team of the Ghanaians is how to make the best out of the present crop of players in camp to achieve the optimum results as competition for a place in the final eleven seem to have reached a crescendo in camp.

Right from the defence through midfield to attack, coach Rajevic will be confronted with the task of selecting a formidable set capable of putting the nation on the path to success in the competition. With the exception of keeper Richard Kingson whose position is secured, the rest will have to battle for a place in the final set of eleven that will do battle for the team.

Coach Rajevic’s headache will be how to build a defensive system capable of putting the breaks on deadly Drogba, Salomon Kalou, Haruna Dindane, Bakare Kone and Kader Keita.

What even makes the Ivorian attack more deadly is the additional support they will receive from midfield ace, Yaya Toure and over-lapping defender Emannuel Eboue and the towering presence of Kolo Toure in central defence.

Even though it looks difficult for Ghana from all considerations, it will still look good for them to annex the maximum points at stake if the right combinations are made especially in central defence where he will be looking for the best partner for Eric Addo in either Lee Arday, Isaac Vorsah or Jonathan Mensah.

The coach is likely to have less difficulty in midfield should Essien pass a fitness test to play, but in his absence will be Agyeman Badu with Kwadwo Asamoah, Moussa Narry and Dede Aryew as the possible pairs, whilst the attack will be more potent if Asamoah Gyan is cleared to play alongside Mathew Amoah.