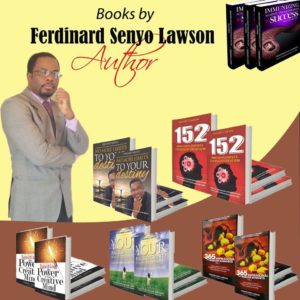 A Ghanaian-British International Transformational speaker, Life Coach, and prolific writer with the mandate to empower, motivate, and inspire the young generation to become significant to the world, has won another prestigious award in the United Kingdom.

Prior to this Award, Ferdinard Senyo Lawson won the 2013, Black, Entertainments, Fashions, Films, and Arts (BEFFTA Awards) among many contestants worldwide. Currently, Ferdinard is nominated for three category awards (Best Author, Best Lifestyle Coach, and Best Public Speaker) by the Creativity Awards (CA Awards), which will be held in November, 2015, at the Hilton Hotel, London, United Kingdom.

Ferdinard has dedicated years of his life writing and inspiring young people through church programs, youth charity programs, Televisions Talk shows, Radio Talk shows as well as travelling abroad for speaking events to empower, motivate and encourage the individuals to remain focused in achieving their dreams and impacting lives.

In May 2011, Ferdinard published his first book – ‘Igniting the power of your Creative Mind. He has published 8 motivational, transformational, and ministry books, which has transformed many lives across the world. He is the most prolific African motivational author of this era.

Ferdinard also strongly believed that, as individuals, we all have the ability to change our mind-set in order to change the beliefs we holds for ourselves, especially the way we see our world.

Although he accepts the fact that, changing our belief system is not an easy task, he then began to put some vital ideas in his book (IGNITING THE POWER OF YOUR CREATIVE MIND) to enable others to develop a positive and regenerated mind-sets about the way they perceive themselves and the world around them (IGNITE YOUR MIND: RENEW AND CHANGE YOUR WORLD).

He is a born again Christian who loves and serves God faithfully. He has described himself as “a man full of passion to see lives changed, transformed and renewed through the word of God.”

Ferdinard also focuses on leadership, relationship and personal development in most of his writing and very active on social media.

He believes that, the journey to greatness has just begun and wishes to be actively involved, changing the mindset of Africans and the world at large. This has led him to set up Ferdinard Lawson Inspirational Empowerment Agency CIC to enable him achieve this mandates. Ferdinard is happily married with two children.