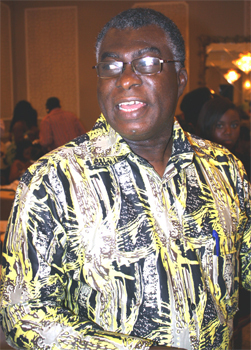 Toronto, March 5, 2011 – Ghanaâ€™s 54thIndpendence Anniversary was celebrated a day in advance at the Ghanaian Presbyterian Church. The main message from His Excellency, Kodjo A. Mawutor, Consul-General at the Toronto Consulate, the guest speaker was that of Unity. Not surprising the loud round of applause that filled the room when Evangelist Diana Asamoah, dressed exquisitely in emerald green embroidered 2 piece chiffon, took the stage and made the remark that Ghana is surrounded on all sides by civil wars, but Prayer has allowed us to evade wars.

This yearâ€™s event had a different flare – A Musical Concert? Under the able leadership of the new executive of the Ghanaian Canadian Association of Ontario (GCAO), there is a sign of what is yet to come as our community matures and evolves. The GCAO is proving to be ahead of the game, and they need our support if they are going to succeed. Just like Ghana; we all must float together or we sink together.

The opening prayer was delivered by Rev. Frank Adu. The attendance was however not what I expected, likely due to the extremely poor weather conditions. In attendance was Dr. Nana Lakumi, who chaired the occasion, accompanied by his lovely wife Roselyn. Dr. Nana Lakumiâ€™s message was how to invigorate our community and tap into the knowledge source so the younger Ghanaian generation will succeed. Other co-chairs were Nana Tabiri and Dr. Twum Barima, whoâ€™s been the GCAO Advisory Board chair for 8 years and eager to hand-over.
The choirs from Presbyterian Church, Methodist Church and Lighthouse Assembly provided a wonderful assortment of melodious church music. Evangelist Diana Asamoah from Ghana took her turn to give a thunderous moving performance. She sang a repertoire of tunes from a new gospel album; and what a strong voice she has! We were treated to a duet by 2 gentlemen from the Ghanaian Canadian Music Association â€“ what powerful voices!

To crown the event, the new GCAO executives were sworn in, followed by cake cutting. The roughly 4 hour event ended with a vote of thanks by Ms.Gifty Amoah and a closing prayer by Rev. Isaac De Graft. Not forgetting the excellent job done by Ms. Lucy Crentsil and Mr. Agyekum Boateng of Sankofa Radio who emceed the occasion.

KUDOS TO ALL THE PARTICIPANTS! KUDOS TO THE GCAO!