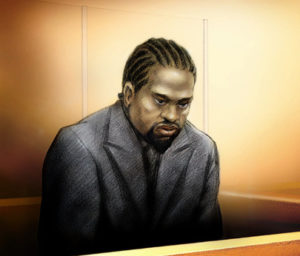 He had sex with murdered Girl
Toronto, Canada — A jealous man admitted Thursday he slaughtered his common-law wife and her teenaged brother while her other terrified brother watched the Christmas Day carnage.
Nana Yaw also acknowledged he violated Illiada â€œLoisâ€ Zoisâ€™ corpse a day after she died, while forcing her brother, Thomas Zois, to watch.
â€œThis is how much I love your sister,â€ Yaw told his disgusted captive.
Etobicoke Crown attorney Sarah Welch described the graphic details of the nightmarish ordeal of Dec. 25-26, 2007.
â€œTo lose two children in such horrific circumstances defies imagination. To have a third child seriously injured, repeatedly threatened with death and held hostage for more than 36 hours, during which time he was forced to witness the murder of his siblings, and the indignity performed on his dead sister, would, for most, be beyond human endurance,â€ Welch said.
Justice Ian Nordheimer sentenced Yaw to life imprisonment with no chance of parole for at least 20 years, saying â€œthe circumstances of this case are truly shocking and almost unimaginable.â€
â€œThey were not simply just killed by Mr. Yaw, they were essentially slaughtered,â€ Nordheimer said.

Yaw, 30, an immigrant from Ghana, pleaded guilty to two counts of second-degree murder of Lois, 22, and Jaime, 14, and aggravated assault for the wounding of Thomas, now 18.
â€œIn my 30 years on the service, this was one of the worst scenes I have ever witnessed, to have people vicitimized this badly, and continuously and with this degree of callousness,â€ Det. Sgt. Gary Grinton said.
Thomas Zois, then 16, witnessed both brutal murders. Jaime was wounded and left gasping for air for hours until Yaw stomped on his head, saying, â€œShut the f— up.â€ Jaime died almost instantly from the blunt force trauma to his face, mouth, lower jaw and brain, Welch said.
Thomas and his brother had been asked to stay with their sister because she feared Yaw and planned to leave him soon. On Christmas morning they were startled to hear a bathroom mirror shattering and loud arguing between Lois and Yaw.Â Yaw was brandishing a corkscrew and she screamed for him to stop, yelling â€œplease, help, he is trying to kill us!â€Â Yaw stabbed Lois with a kitchen knife, dropping her to the floor. She tried to crawl toward the door but Yaw kept plunging the knife into her chest, back, neck, upper arm and thigh, Welch said.
Massive internal bleeding killed her. Jaime tried to flee to get help, but Yaw grabbed and stabbed him. Jaime suffered six wounds to his neck, back, upper arm and torso. His neck wound allowed blood to fill his lungs. He was seriously injured but alive.Â Yaw chased Thomas, who was stabbed in the right chest and left forearm. He tried to escape via the balcony of the Kipling Ave. highrise, but it was too high to jump to safety.Â â€œThomas pleaded for his life and Yaw did not kill him,â€ Welch said. Instead, Yaw helped him tend his wounds.Â Yaw drank heavily and threatened to kill Thomas but was convinced to spare him.
Yaw moved Loisâ€™ corpse and Jaime, still alive, into another room. When Jaime wheezed loudly, Yaw killed him.
Yaw gagged Thomas and tied him to a chair in a bedroom closet, and then fled.Â Thomas freed himself and went to police, on Dec. 26.Â Thomas, amazingly, has graduated from high school and received kudos last summer while working for the Toronto Police on a youth program, court heard.
Yaw took a bus to Windsor on Dec. 27, then returned to Toronto and surrendered to police.Â He apologized in court Thursday, saying, â€œI still cannot believe that I did these terrible acts. I am locked in a jail, but what is worse is that my mind is locked in the horror of my actions day and night. I will never recover from the horror of my actions; they will haunt me forever. My life is over.â€