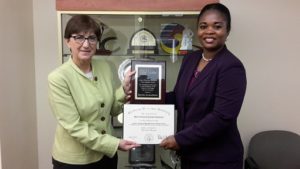 Ms. Mavis Kwainoe, a Ghanaian magistrate, has won this year’s prestigious George Washington University Law School (GW Law) Justice Thurgood Marshall Civil Liberties Award, in Washington, D.C.
The award, which was instituted in honor of the late Justice Thurgood Marshall, the first African-American to serve on the U.S. Supreme Court, and a pillar of the civil rights movement in America, is awarded to “a member of the graduating law class who has demonstrated outstanding performance in and dedication to the field of civil rights and civil liberties.”
Ms. Kwainoe, a member of the graduating class of 2015, GW Law, studied for a Master’s degree in International and Comparative Law. For her award, she received a cheque for $500, a Dean’s Certificate, a plaque, and would have her name permanently inscribed on the Marshall Award wall plaque located in the law school.
A citation accompanying the announcement presented by Assistant Dean Alfreda Robinson of GW Law pointed to many accomplishments of Ms. Kwainoe, including her academic accomplishment that led to her being named a Thomas Buergenthal Scholar. In addition, she also participated in civil rights and civil liberties-related events both at GW Law and externally, that were widely covered and published by the media.
Citing some of the programs, Dean Robinson said, Ms. Kwainoe was a panelist on an anti-corruption program, where she provided insights into how to combat corruption in Africa; served on a United Nations panel that discussed how to uphold the civil liberties of victims of sexual violence by preventing re-victimization; and participated in the 2015 Women and Justice International Conference in Washington, D.C, that brought together high ranking women judges from around the world.
Ms. Kwainoe expressed surprise for the award, and thanked God for the favor and grace, adding that “This award is not only for me, but it is also for Ghana, and all the groups I represent, including the Ghanaian judiciary and International Association of Women Judges (IAWJ).”
“I’m optimistic that I would apply the principles of civil liberties and civil rights as epitomized by Justice Thurgood Marshall’s call for protecting and respecting civil rights and civil liberties. This will be translated into the quality of rulings that I would churn out especially in cases involving civil rights, civil liberties, and rights generally”, Ms. Kwainoe added.
Justice Marshall died at age 84 on January 25, 1993. Prior to joining the Supreme Court on October 2, 1967, he led the defense team of the NAACP to argue the landmark case in Brown v. Board of Education in 1954, urging the Supreme Court to abolish the ‘separate but equal” system of racial segregation in public schools. The Supreme Court ruled in favor of the NAACP and abolished racial segregation in public schools in 21 states