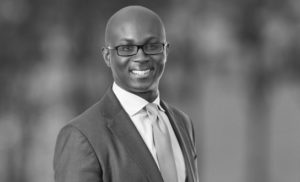 White and Case Partner Joshua Siaw has been named, for the second consecutive time, as one of Britain’s most influential people of African or African Caribbean heritage by the prestigious Powerlist 2017 publication.

The Powerlist profiles the top 100 most influential black people in Britain, selected by an independent panel of judges and chosen because of their ability to “positively alter events and change lives as demonstrated over a protracted period of time.”

London Mayor Sadiq Khan delivered a keynote address at this year’s 10th anniversary event in London honoring the individuals who made it onto the Powerlist.

Siaw, who was also profiled in last year’s Powerlist, said he felt honored to be among the top 100. “It is such a privilege to be named alongside such immensely talented individuals and role models.”

Siaw is a partner in White & Case’s Global Banking Practice and Director of the Firm’s Africa practice. He advises corporations, governments, banks and other financial institutions on cross-border deals in Africa. He has been named by Forbes as “one of Africa’s most influential young business leaders” and was recently identified as one of Africa’s “Rising Stars” in Euromoney’s list of individuals and power brokers who are transforming the financial, investment and business landscape in Africa. In addition, Siaw was also named a “Young Business Leader of the Year” by the African Union, and leading Africa-focused business publication The Africa Report also recognized Siaw as “one of three individuals shaping Africa’s economic future.” He was listed in Marquis Who’s Who in the World 2016, which features the most accomplished men and women from around the globe.