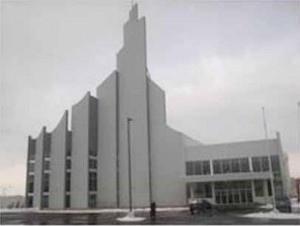 The Ghanaian Presbyterian Church, Toronto, Canada, did raise one million Canadian dollars last year through TITHES and OFFERING to pay for mortgages, repairs on the current Church House and wages. He disclosed there was about 200 thousand Canadian dollars in the coffers.
This was contained in a brief statement of account read to the congregation by Brother Odoi Yemoh of the Accounts Department of the Church to precede a Congregational Conference held on Sunday, March 8, 2015. According to him, in July this year, audited accounts will be submitted to the congregation for study and discussion.
Opening the Congregational Conference, the Resident Pastor, Rev. Raymond Baah Abekah, urged the members to increase its membership by one hundred people. This will be the cardinal aim of the CHURCH to win SOULS for CHRIST.
The first conference, since his assumption of office last year, the Rev. Baah Abekah, appealed to the congregants to at least help increase the membership by one hundred people this year.
The theme of the conference was “THE GROWTH OF THE CHURCH”.
The Rev. Baah Abekah said there were many people in Toronto who have no places of worship, adding it should not be impossible to recruit them.
He told the members that it was more blessed to give than to receive and advised them to learn how to give, stressing those non-Christians in Canada know how to give and share. How much more Christians? He told the group leaders of the Church to intensify education on giving.
At the end of his remarks, the Resident Minister opened the floor for comments, suggestions, questions and answers.
In an answer to a question, the Rev. Baah Abekah said by the decision of the Session, two services – Twi and English – may be provided every Sunday.
Brother Kwaku Twun of the Church Choir said TITHE payment in the Church was high sometime ago and this was due to the teachings on TITHE the congregation received. He therefore suggested the restart of the teachings.
Rev. Baah Abekah was full of praise for Brother Twum and said “pay the tithe and you will get the testimony” and assured the congregation of the re-start of the teachings very soon.
About appointment of Committees, Elder Alex Barning suggested that Committees must be appointed from all Groups and non-group members in the Church. It should never be a one man committee with a mandate to appoint his/her own members