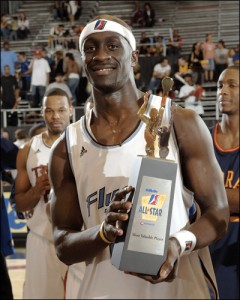 After starting out as a junior at the English Basketball League club Hackney White Heat, Mensah-Bonsu moved to the USA. He spent his sophmore year of high school playing at the Hun School of Princeton in Princeton, New Jersey, then transferred to St. Augustine College Preparatory School in Richland, New Jersey. He majored in psychology at the George Washington University, where he played power forward and center. He was second team all-conference in 2004-05 and averaged around 15 points per game for his career. He was best known for explosive dunks and became a favorite of ESPN SportsCenter host Scott Van Pelt, who would often mention Mensah-Bonsu at the end of telecasts.

At George Washington, Mensah-Bonsu helped lead the Colonials to the 2005 NCAA Tournament, where they lost in the first round. The next season was more successful, with the team ending the regular season 26-1 and being ranked in the national top 10 for the first time in 50 years. However, he suffered a knee injury near the end of the regular season and he did not return until the 2006 NCAA Tournament, where the injury lessened his production. The injury probably led to Mensah-Bonsu not being drafted by an NBA team. GW lost to Duke in the second round of the NCAA tournament after defeating University of North Carolina Wilmington.

Mensah-Bonsu initially signed a two-year contract with the Dallas Mavericks, and played for the Fort Worth Flyers, the NBA D-League affiliate of the Mavericks. He made the D-League All Star Team and was MVP of the game, with 30 points and 7 rebounds.

Mensah-Bonsu was recalled to the Mavericks on February 8, 2007. He scored his first NBA points against the Atlanta Hawks.

For the 2007-08 season, he played with the Italian Serie A team Benetton Treviso, averaging 8.3 points and 9.2 rebounds, shooting 59% from the floor and 77% from the free-throw line. During the following summer, there was much uncertainty whether he would return to the NBA or sign a contract in Spain, but he finally inked a one-year deal with the Spanish ACB team DKV Joventut. He was released in December due to a shoulder injury, after averaging 18.5 points per game in 2 league matches.

On March 6, 2009, the Toronto Raptors picked up Mensah-Bonsu, giving him a guaranteed contract until the end of the season. Pops made his debut with the Raptors on March 6th 2009, against the Miami Heat, posting 4 points and 10 rebounds and a fantastic one-handed dunk by the assist of Anthony Parker. He played 15 minutes in his Raptors debut.

On Sunday, March 15, Pops Mensah-Bonsu recorded a career high in points with 21 points and 8 rebounds against the Indiana Pacers, and received a standing ovation after the game from Raptors fans during a post game interview. he also got a standing ovation when he was taken out of the game in the last few minutes

Mensah-Bonsu was part of the Great Britain national basketball team that qualified for the Eurobasket 2009. During qualification he averaged 12.2 points, 10 rebounds and 1.8 blocks.

Having been born and brought up in North London, England, Mensah-Bonsu is a big fan of Tottenham Hotspur, more commonly referred to as “Spurs” in the United Kingdom.