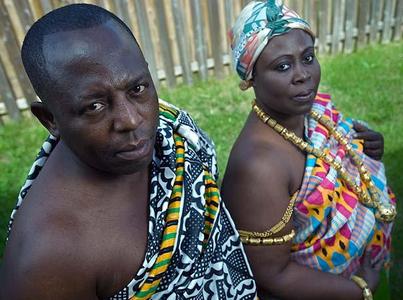 To her friends and neighbours in Brampton, Margaret Adu is an ordinary citizen, a hard-working and loving mother.

But to the people in Adanse-Praso in Ghana, the Brampton woman is the anointed Queen Nana Serwaaprah, in charge of the well-being of the 2,000 tribesmen in the remote rural community that has no running water or electricity.

It is stressful and costly to be a tribal queen, especially when you have to govern a village in West Africa, 8,707 kilometres away, from your comfortable suburban home in Canada.

The 18-hour flight to Ghana for the unpaid job can cost $2,000 â€“ paid out of pocket and taken out of vacation time at work.

“It is a lot of responsibility and I’m a working mother,” said Adu, 44, a chef with Corrections Canada.

“I don’t sleep â€“ always thinking what I can do to help these kids in the village. They have nothing and it’s hard.”

Adu is among an estimated 20 tribal queens and chiefs from Ghana who have made Greater Toronto home, but travel back and forth regularly to deal with village matters, said Kwasi Akuamoah-Boateng, an organizer of the 20,000-strong community in the GTA.

“A queen is an adviser to the chief and the chief is the head of the village,” explained Akuamoah-Boateng, also known as Nana Doggo.

“The system has been in place since the Portuguese came in 1471. The queen and the chief are treated like royalty. Everyone looks up to them.”

Adu was tapped to be queen two years ago when she returned home for the funeral of her maternal grandmother, her predecessor. The majestic titles of queens and chiefs are only passed down on the female side of the family.

“I said no to them,” recalled Adu, who grew up in nearby Kumasi and was sponsored by an aunt to come to Canada in 1983. “We have a school, but there’s no books or stationery. What am I going to do? They have all these needs and I’m still paying my mortgage.”

But at the funeral, the title was forced upon her by her uncle. Still grieving, and wearing black attire, she was carried by seven men in a parade around town as the village’s new queen.

“I had no choice but accept it,” said Adu, who spent six weeks there to learn about the village and will return for four weeks in November.

Addi Amponsah, who came to Canada in 1987, became the chief of the Akusu tribe in 2000 and spends as many as six months a year there for his 1,000 tribesmen, offering marriage counselling, resolving disputes and addressing whatever needs his people have.

Over the years, he helped pay for a new school and to lobby the Ghanaian government to bring electricity to the community.

“I really enjoy my job. Now I only travel to Canada for a visit,” laughed the 53-year-old Brampton man, who travels between the two countries often for the import-export company he owns.

In their absence, Adu and Amponsah say their deputies run the villages in Ghana, but they make all major decisions.

Other than the compound they inherit from their predecessors where they stay during their tenures, chiefs and queens aren’t paid for their services.

“Wherever you go, people respect you and greet you and treat you like a celebrity. You are not even supposed to sweep the floor,” noted Amponsah. “People there do your cleaning, cooking and do everything for you. They bring me food and wash my clothes.”

Here, the chiefs and queens live normal lives, but are like Ghana’s informal ambassadors, reaching out to the Canadian community and creating awareness of the challenges their countrymen face.

Recently, Adu and Amponsah were invited to a fundraiser in Toronto organized by University of Western Ontario business graduate Arpit Bansal, for the Hope for the African Child Foundation.

“It is an honour to have them attend the fundraiser,” said Bansal, who volunteered to build schools and houses in Ghana last summer. “Having worked there really helped me realize and appreciate the hardships their people face.”

Adu is happy the $3,000 raised will give 30 children an opportunity to go to school. “People there don’t go far because if you can’t get an education, you are done,” she said.