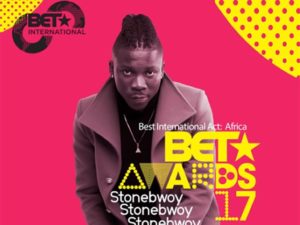 Dancehall artiste Stonebwoy has been nominated for the 2017 Black Entertainment Television (BET) Awards.

This will be the Ghanaian’s second nomination, in the Best International Act: Africa category. He won it at the 2015 edition.

Apart from Stonebwoy, Wizkid and Davido have also won the award before. Wizkid jointly won the award with Sarkodie at the 2012 edition while Davido won it in 2014.