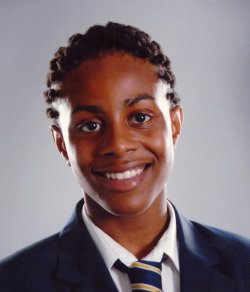 Two Ghanaian teenage brothers, residing in the United Kingdom with their parents, have been jailed for life by a court in London, after finding them guilty of murder of another teenager.
They were part of a gang of six who murdered an innocent army cadet and a model pupil Shaquille Smith, 14.

George Amponsah, 19, and his brother Freddie Amponsah, 17, will be in jail for a minimum of 18 years each.

The Ghanaians were key members of a knife-wielding gang in Hackney in the Eastern part of London, the court was told.

Other members of the gang, who were sentenced together with the brothers, include â€˜Savaloyâ€™ Dufeal, 20, Amisi â€˜Hidzâ€™ Khama, 18, Kadean â€˜Littlzâ€™ Dias and Leon â€˜Kidsâ€™ Atwell, both 17, were all found guilty of murder last month, and jailed last Thursday.

The group will all serve a total minimum of 96 years in jail, before being considered for parole.

During the trial, Shaquilleâ€™s mum, Sandra Maitland, 44, was forced to watch as his killers strutted into the dock, sticking two fingers up at the justice system.

They showed no remorse as they made crude gestures towards the public gallery with their fingers, as if they were firing a gun or slitting throats with a knife.

They were therefore sentenced one after the other to avoid violence in the dock, which was the fear of prison officials, and after the verdicts, jurors wept as Sandraâ€™s moving victim impact statement was read.

Shaquille was stabbed to death by the gang mob, which had been roving around Hackney, East London on bikes, last August looking for trouble.

A CCTV picture shown at court, and on national television stations, portrayed the boys, most of them in hoods, riding carelessly and haughtily in front of cars and through red lights and on pavements, in a 10-strong relay on the day of the night of the incident.

The Old Bailey court in London heard that Shaquille was chatting with two friends in a park opposite his home, when they were spotted by the gang, nicknamed â€œLondon Fields Boys.â€

The court also heard that on getting close to where the victim stood with his friends, they abandoned their bikes and climbed over a fence into the park in St Thomasâ€™s Place, where the knife-wielding teenagers went aggressively to the three friends, and one of them knifed Shaquille in the stomach.

The court was told that Shaquilleâ€™s mother was coming out to call him inside for some house chores, when he was attacked together with his two friends.

A Sixteen-year-old girl with him was reported to have been slashed across the face and neck as she tried to fight them off.

The other friend, Tyrell Goather, 18, who had been walking his dog, was lucky to escape the unprovoked but life-damaging fans.

When Shaquilleâ€™s mother looked out of a window and saw him lying but smiling, she believed he was safe. Upon getting closer that she realised she was losing her dear son to horrific knife crimes that had hit London for the past three years.

Shaquille was rushed to hospital, and at first it appeared he would survive. But his main artery had been severed, and after three heart attacks in an operating theatre, he passed away.

He became the 25th, as well as the youngest, to be knifed to death in London last year.

In total, 28 teenagers were killed with knife by fellow teenagers in 2008 – four of the victims were reported to be Ghanaians.

At the time of his death, Shaquille was preparing to return to Sir John Cassâ€™s Foundation School after the summer holiday, to begin his GCSEs. He had also been accepted into the army cadets.

According to him, â€œShaquille was in a place where he should have felt safe. He was entirely blameless.â€

Judge David Paget, who presided, said they had attacked Shaquille, who had done nothing to provoke them. â€œHe was truly innocent, and what is more, he was yards from his own front door,â€ said the judge.

Judge Paget added: â€œThe most shocking aspect is that it was completely unprovoked and completely unnecessary. It was truly mindless violence, resulting in the death of a totally innocent 14-year-old boy, sitting yards from his front door.â€

Efforts to reach the parents of the jailed Ghanaian teenagers have so far proved unsuccessful.