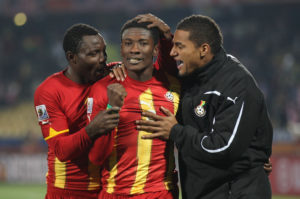 The trio will contend against seven other players including the reigning CAF Player of the Year, Didier Drogba for the most coveted individual honour in African football.

The nominees who were revealed by the Confederation of African Football (CAF) on their website, was determined by the Media, Technical and Football Committees of the continent’s soccer governing body taking into consideration the performance of the players from January to November 2010.

The trio have been in spectacular form for the Black Stars, especially Gyan, who for some time has been in the best form of his career at major competitions including the Africa Cup of Nations and the FIFA World Cup in Angola and South Africa respectively.

The winner will be decided by votes from the respective senior national teams’ Head Coaches or Technical Directors of the 53 National Associations affiliated to CAF.

Meanwhile, CAF has also nominated five players for the African-based Player of the Year, meant for only players playing in their domestic leagues.

The Awards Gala will be organized on December 20, 2010 in Cairo, Egypt.