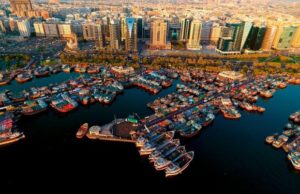 More wealthy Ghanaians are investing in Dubai property, encouraging a growing number of property companies from Dubai who are using Ghana as their destination to target buyers across West Africa, especially Nigeria.

Glamourous and sales girls are always seen in airport terminals and hotel lobbies in Accra, Tema, Kumasi and Takoradi trying to sign up rich Ghanaians to “exclusive viewings” at the emirate’s latest property developments.

Over $6 billion has been invested in Dubai’s property market by Ghanaians and Nigerians over the past three years, document by First Group, a property company based in Dubai has stated, noting that, “Nigerians account for 60 percent of all sales by the company”.

Asked why he was con­sidering investing in Dubai rather than his homeland (Ghana), Kwesi Damfi, an oil mogul told Business Day that: “Dubai looks safer.”

Mr. Damfi, whose only glimpse of the emirate came when he transited through Dubai on the way for medical treatment in India, added: “Dubai looks like the world centre now if you look at the people coming in from all over the world. It seems to be a guarantee of a return for an investment.”

Dubai has long been the regional hub for the oil-rich Gulf States, but the ambi­tious city state is never one to rest on its laurels.

The emirate has for years been touting itself as the central node for 2 billion people, spanning the Middle East, the subcontinent, central Asia and eastern Africa. Now, even West Africa, an eight-hour flight away, is on its radar.

Paris and London have long been the hub for western African states, but Dubai is now giving these established centres a run for their money. Emirates airline’s Dubai-Lagos flight is renowned for cost and by being packed.

Some banks, such as Standard Chartered, have chosen to cover some busi­ness lines in sub-Saharan Africa from its regional headquarters at Dubai’s financial centre.

Luring talent to the com­fortable Dubai lifestyle is easier than some African postings, while reaching various outposts of the con­tinent can be easier from the city’s thriving airport than other hubs, such as Johannesburg and Nairobi.

As Chinese and Asian firms chose Dubai for their regional headquarters, of­ten these businesses are not only targeting the Gulf, but looking to use the city as a launch pad into sub- Saharan Africa as well.

The Ghana-Dubai property love-in is still going strong as the prop­erty market in general im­proves. Jones Lang LaSalle in a recent second-quarter report noted that villa prices in Dubai had risen by around 20 per cent over last year, while apartments in popular buildings are flat on the year.