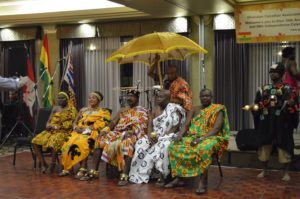 The banquet, which was attended by Ghana’s High Commissioner to Canada, Dr. Sulley Gariba and several members of the BC Legislative Assembly, was the high point of a series of a year-long activities the GCABC held to mark the 30th anniversary.

The celebration coincided with Ghana’s 59th independence anniversary and as GCABC President Dr. Charles Quist-Adade said, the banquet was a “double-whammy,” which provided a unique opportunity to celebrate the cordial relations between Ghana and Canada.

The celebration was partly funded by the Canadian government. It took off in July 2015 with a family picnic and a soccer gala between the Ghanaian team and their Liberian counterpart. This was followed by a cultural night in August.

The celebration continued this year with a Youth Jamboree/fundraiser at the Queensborough Community centre in New Westminster and a symposium on March 18 at Doulas Community College.

In his keynote address, Dr. Gariba told the audience at the symposium that his mission was to engage the Ghanaian-Canadian communities across the country in optimizing their contributions to the development of Ghana.
Noting that the “Ghanaian Diaspora has come of age,” Dr. Gariba said Ghanaian-Canadians are increasingly becoming the backbone of the service industry in Ghana, investing in real estate, hospitality, electronic and other businesses.

Ghanaian exports to Canada, Dr. Gariba observed, are driven largely by Ghanaian-Canadian entrepreneurs. The John Mahama government’s aim is to explore ways to tap into and strengthen this huge potential, and the High Commissioner said the Ghana mission’s duty was to carry this task forward. He announced that he has started touring and consulting with Ghanaian communities in the country for this purpose.

In his welcome address, Dr. Quist-Adade said Ghanaian presence in British Columbia predates the official registration of the association in 1986, going back to the early Sixties. He said Ghanaian-Canadians have enjoyed the peace and stability Canada has offered them and thanked Canadian government and people for the warm embrace and hospitality.
The peace and stability in Canada has enhanced the ability of Ghanaian-Canadians to assist the development of both their land of birth and their second home, Dr. Quist-Adade said.

“Since the arrival of the first Ghanaians on the shores of this great country in the 1960s, Ghanaian-Canadians (“Ghanadians”) have enjoyed peace, warm embrace, and incomparable hospitality, which have enabled them to contribute in a variety of ways towards the development of their new-found home and their country of birth,” Dr. Quist-Adade observed.

In her inspiring presentation, Honorourable Jane Shin, Member of the Legislative Assembly (MLA) for Burnaby-Lougheed, encouraged Canadians of African extraction to be more involved in politics. She said it was regrettable that there are no elected African-Canadians in the Legislative Assembly and urged them to organize towards promoting a candidate in future elections.

She extended an invitation to members of the GCABC for a visit to the Legislative Assembly in Victoria this spring.
Other speakers at the symposium were Dr. Kwawu Agbemenu and Mrs. Theresa Agbemenu. Dr. Agbemenu recounted the history of the Ghanaian presence in BC and the roles the GCABC and individual members have played over the years.
He observed that Canadians of Ghanaian heritage have and are contributing in all areas of Canadian society and singled out for special mention, Dr. Kojo Ohene-Asante, a prominent medical doctor noted for his ground-breaking research and practice in Fetal Alcohol Syndrome. Dr. Asante has won several medals and accolades, including Queen Elizabeth II Diamond Jubilee Medal recipient for 2012 and City of Vancouver Black History Month Award-2015
Mrs. Agbemenu touched specifically on the versatile and indispensable roles Ghanaian women play in Ghanaian society. Quoting the preeminent Ghanaian educationist, Dr. Kwadwo Kwaggir Aggrey, Mrs. Agbemenu noted that “to educate a man, society educates one person.” However, “to educate a woman, society educates a whole nation.” She therefore called for intensified efforts to promote girls’ education.

MLA for Whaley, Surrey, also congratulated the Ghanaian community on the double anniversaries.

The GCABC, which was registered as non-profit organization in 1986 has chalked several accomplishments during the past three decades. Its most recent one is its Youth Scholarship Fund. Since its inception in 2009, 10 students in BC and 5 in Ghana have benefited from the fund.
In addition, it has fund-raised to support relief efforts and charity projects in Ghana and Haiti, including floods in Northern Ghana and the earthquake in Haiti.

Last year, the association donated a sewing machine and a multipurpose stove to the Ryhan Vocational School in Cape Coast and 10 bags of cement to the Eguafo Secondary School, both in the Central Region.
Individuals and groups in the association have also assisted in development projects in Ghana. The Ghanaian-Canadian Nurses Association of BC has donated $4,600 to three hospitals in Ghana since its inception in 2010.
Mr. George Piprah, Honourary Consul-General of Ghana in BC’s Foundation of African Children’s Education (FACE) donated thousands in scholarships to 320 students in various regions in Ghana. The latest donation was over $60,000.
GCABC president, Dr. Quist-Adade has led and inspired his social justice students from Kwantlen Polytechnic University to fund-raise to support projects in Ghana including the construction of a school building in Eguafo.
In addition, over a dozen students in Canada and Ghana have benefitted from the GCABC Youth Scholarship Fund thanks to funds raised by Dr. Quist-Adade’s students. With the help of the Africa’s Education through Technology (AFRETECH) and the Rotary club of Delta, B.C. Dr. Quist-Adade and his students have donated school supplies, computers, and hospital equipment to the tune of over $1.5 million to schools and hospitals in 5 regions.
Finally, Dr. Quist-Adade’s students have created and donated 45 solar lanterns to rural schools in the Central and Eastern regions to assist them in completing their homework during the night.

The celebrations rounded off with an interdenominational church service at the Lighthouse Chapel International in Surrey, which was presided over by Pastor Kojo Frempong.