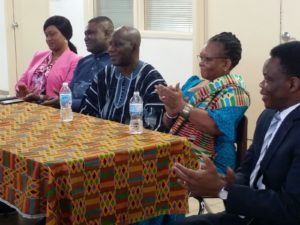 A very simple but impressive as well as colourful gathering was held on Sunday, January 22, 2017 at premises of the Ghanaian Presbyterian Church in Toronto to bid

The function which was organized by the Ghanaian Canadian Association of Ontario (GCAO) was attended by representatives of Chiefs and community leaders in the Toronto Ghanaian community including some youth leaders. 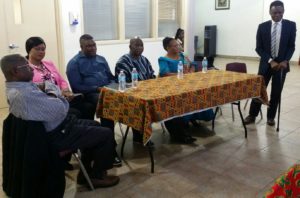 After an introductory speech by the President of GCAO, Mr. Emmanuel Duodu during which he praised Dr. Gariba for his vision and commitment to Ghanaians living in Canada, Mr. Wofa Yaw Nyarko, the past President of GCAO presented the outgoing High Commissioner with a plague.

It read:
‘This award is in recognition of your commitment to the development of the Ghanaian community of Ontario, Canada during your tenure as Ghana’s High Commissioner to Canada. Indeed, you served our community with dignity and honor during your short duty period (2014 – 2016). May God bless and guide you in all your future endeavors.’

Dr. Gariba was also given a collage of photographs of his duty in Canada especially with the Ghanaian community as put together by Mr. Brako.