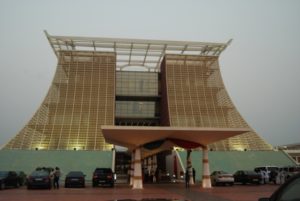 A preliminary report from the technical team working at the Jubilee House has indicated that US$82 million has so far been spent on the facility as against the US$30 million said to be the cost initially.In addition to the money spent, an additional US$50 million would be needed to complete the project involving landscaping, residency for security personnel, clinic, post office and clearing of the “forest” behind the House, which poses a security threat. Briefing the media in Accra on Thursday after a tour of the Jubilee House, Mr Samuel Okudzeto Ablakwa, a Deputy Minister of Information, said another 6.5 million dollars would have to be paid to the contractors working on the building in addition to the consultancy fee of about 10 per cent.

He said government was satisfied with the work done so far but that President John Evans Atta Mills would not rush to move into the place when the security residency had not been completed. Staff bungalows of the Ghana Broadcasting Corporation opposite the main entrance of the Jubilee House would have to be brought down and a residency for security staff built.

He explained that consultations were ongoing between the government and the management of GBC on this development.

Mr Ablakwa, who was accompanied by Mr James Agyenim Boateng, also a Deputy Minister of Information, refuted allegations that government was going to use the building for a poultry farm or a polyclinic saying the government would continue with the project though it was not a priority. “It is a national asset put up with the tax payers’ money and should be continued to its completion to serve as a national monument for all”, he added.

He noted that government would make available money for the contractors by the end of the year to see to the full completion of the House, and that although there would be some movement of staff, the President would not rush until all the concerns raised were addressed.