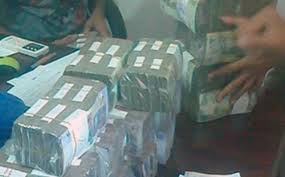 The Government of Ghana borrowed about GH¢6.3 billion from both domestic and foreign lenders within the first three months of this year, pushing the country’s total debt to GH¢58.4 billion.

The Bank of Ghana has reported that the country’s debt is more than half of Ghana’s Gross Domestic Product (GDP) as the domestic debt component inches closer to 50% of the total public debt.

Dr. Wampah at the end of the 60th meeting Monetary Policy Committee said in Accra that between January and May this year, the government paid GH¢2.8 billion as interest on loans contracted as against an expected figure of GH¢2.2 billion.

Meanwhile, government has failed to meet its revenue target for the first five months of this year, following a dip in imports and low mining sector corporate taxes and mineral royalties.

According to the Bank of Ghana, total revenue and grants between January and May this year was GH¢9 billion, below the target of GH¢9.5 billion. Out of this, total tax revenue amounted to GH¢7.1 billion, lower than the estimated GH¢7.3 billion while non-tax revenue outturn was almost in line with projected estimates at GH¢1.8 billion, driven mainly by oil revenues. Grant disbursements remained low at GH¢79.4 million, against an estimated GH¢393.3 million.

Dr. Wampah expressed worry at the country’s fiscal position in the face of the decline in government’s revenue, which poses significant risks to the economy as government expands its subsidies programme.

‘These fiscal developments resulted in a deficit of GH¢4.12 billion (3.9% of GDP), almost at par with the estimated GH¢4.1 billion (3.8% of GDP) for the period. In the corresponding period of 2013, the fiscal deficit was GH¢3.8 billion (4% of GDP). The budget deficit was largely financed from domestic sources, with Net Domestic Financing of GH¢3.2 billion, against an estimated GH¢3 billion.

‘On the domestic economy, the Committee noted that the risks to the fiscal outlook have increased on account of underperformance of government revenues, the rising share of compensation of employees in domestic revenues and the increasing difficulty of raising financing from traditional sources.

‘The situation is further compounded by the emergence of subsidies due to delays in adjustment of petroleum and utility prices, build-up of arrears particularly on statutory payments, delays in the implementation of some revenue measures outlined in the 2014 budget and slow disbursement of program grants,’ he said.

Currently, the government is readying to issue its third Eurobond worth US$1 billion for 10 years to mainly refinance maturing debts and other interest payments.

Ghana debuted a 10-year Eurobond seven years ago after enjoying macroeconomic stability and debt-forgiveness between 2002-07. The issue, which raised US$750million from investors at a coupon of 8.5 percent, made Ghana the first nation in sub-Saharan Africa after South Africa to borrow from international capital markets.

The government issued a second 10-year bond in July 2013 to raise US$750million in cash and US$250million in a buy-back of the 2007 issue. But analysts said the yield of 8 percent on the bond — compared to 5.63 percent and 6.63 percent on bonds sold by Zambia and Nigeria respectively in the 12 months to Ghana’s sale — reflected the worsened domestic economic situation, with large fiscal and current-account deficits souring investor sentiments.