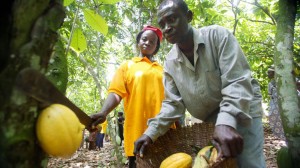 Finance Minister, Dr Kwabena Duffuor on Friday said Ghana’s economy was able to withstand the impact of the global financial crisis, mainly due to the strong performance of cocoa and gold exports.

He made the observation at the inauguration of the Economic and Commercial Office of the Spanish Embassy in Accra. The ultra-modern office is expected to improve the implementation of Financial Protocols between Ghana and Spain.

Dr Duffuor said the cedi had stabilised and appreciated in relation to the dollar in the last few months, an indication that government’s programme of fiscal consolidation and stabilisation of the economy was on track.
“Inflation has begun to respond favourably to the stabilisation policy interventions with the rate dropping to 18.4 per cent in August,” he said. Dr Duffuor noted that the fiscal performance of the first three quarters of the year was encouraging and expressed the hope that the country’s financial target for the year could be achieved. Referring to the recent rating of the Standard Bank Trade Idea, he said Ghana’s cedi was the preferred currency trade out of a basket of 24 emerging countries.

Dr Duffuor called on officials at the Embassy to liaise with his sector Ministry, to remove bottlenecks in the implementation of financial protocols. Mrs Julia Olmo Romero, the Ambassador, observed that Ghana and Spain had, for the past nine years, signed two financial protocols through which the Spanish Government offered concessionary funds to finance projects of mutual interest.

Mrs Romero said under the second protocol, Spain provided five million euros, to finance feasibility studies for strategic projects and programmes. “Spain is keen to work with Ghana to boost the use of these funds since this kind of co-operation opens the door to transfer of know-how and state of the art technologies in key sectors,” she said.

Mrs Romero announced that the Council of Ministers in Spain had approved a new export plan of infrastructure to Sub-Saharan Africa estimated at about 70 million euros and Ghana was chosen as a priority country. “The funds will be non-reimbursable and allocated to Ghana through grants for projects in renewable energy, electricity, water, environment and transport infrastructure.”

Mrs Romero expressed the hope that the new office would be well utilised to deepen the cordial relations between the two countries.