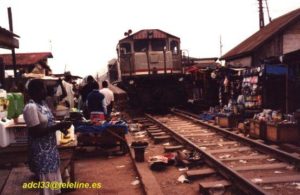 More than $2billion is to be injected into the rail transport system in the country to make it a safer, affordable and cost effective alternative to road transport.The investment is to revamp the sector to facilitate the movement of goods and along the Accra â€“Koforidua- Kumasi â€“ rail line, which is one of the busiest rails in the country.The Project, which is expected to be implemented this year, will be funded by the African Railway company.The Deputy Minister for Transport, Mrs. Dzifa Aku Attivor said that upon completion of the project, travelling from Accra to Koforidua in the Eastern Region and Kumasi in the Ashanti Region will be faster, whilst the toll that heavy vehicles took on the roads and road accidents will reduce to the barest minimum.The deputy minister made the announcement when she was accompanied by the Eastern Regional Minister, Mr. Samuel Ofosu Ampofo, and the Municipal Chief Executive for New Juaben, Mr. Alex Asamoah, and officials of the Ghana Railway Company (GRC) to inspect encroached lands along rail lines in Koforidua last Saturday.The visit also afforded the ministers the opportunity to appeal to squatters on the Companyâ€™s land to vacate, otherwise they will be ejected.The deputy minister said, since the operation of a modern and effective railway system is more affordable, cheaper and cost-effective; the government is determined to seek the active participation of investors to commit resource to the sector.Mrs. Attivor indicated that the involvement of foreign investors in the railway system will transform unprofitable state into a viable commercial enterprise that will offer prompt and quality services to commuters.â€œThe problems of the GRC have been made worse as many illegal settlers have not only taken over the lands of the company but have also contributed to the current dilapidated state of the railway lines across the country,â€ Mrs. Attivor said.She, therefore, appealed to the illegal settlers to relocate 100 feet from the rail lines, since their presence close to the lines can scare away investors from investing in the sector.For his part, Mr. Ofosu Ampofo, who took Mrs. Attivor round to observe at first-hand some of the unauthorised structures sited close to the rail lines in Koforidua, appealed to the squatters to relocate to facilitate the development of the area.That, he said, will enhance the development of the central business district of Koforidua to make the area investment-friendly.