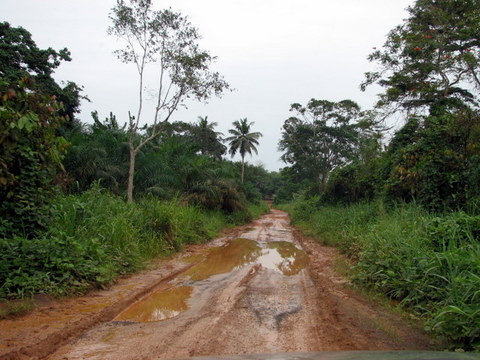 Government has pledged to rehabilitate roads in the Western Region to facilitate easy transportation of minerals, timber and other natural resources to the urban centres.

In the interim, the Regional Highways Department has been directed to rehabilitate the dangerous portions of the roads while plans were underway to tar major road networks linking the major economic areas. Mr Joe Gidisu, Minister of Roads and Highways disclosed this at Sefwi-Wiawso on Friday after a three-day working visit to the Region. It was a follow-up to President John Evans Atta Mills recent tour of the Region.

The rest were the 17-kilometre Sefwi Bodi-Juaboso road, in the Juaboso District and the 84-kilometre Bencheman-Osei Kojokrom road in the Bia District.

The roads link communities producing natural resources such as gold, bauxite, timber, cocoa, coffee and rubber to the urban centres for exportation.

The flood prone roads have no culverts and bridges, and are narrow and muddy, which make it difficult for commuters to use. Due to the deplorable conditions of the roads, farm produce do not get to marketing centres on time since few vehicles ply the route. The four-wheel vehicle of the Minister got stuck on the Samreboi-Prestea- Nkwanta road compelling him to join efforts to free it from the mud.

Mr Gidisu said the Ministry would liaise with the timber processing companies in the area and the Ministry of Food and Agriculture to impress on the Ghana Cocoa Board to co-operate with government to undertake periodic maintenance on the roads.

He said government was committed to implementing its road infrastructural development plan contained in the National Democratic Congress 2008 manifesto.

The Minister said there was no justification for the Region to have poor roads since the area had abundant natural resources, which was a major component of the country’s economy. Mr Gidisu said henceforth, government would award road contracts to local contractors who knew the terrain better to spur them on to perform better.

He urged the district assemblies to allocate resources to maintain roads within their jurisdiction rather than relying on the central government.

Mr Gidisu called on the people to exercise patience as government was mobilising resources to address their problems. Mr Aidoo said contracts some awarded in 2007 and which mobilization funds were paid had not been executed.

He called on the district chief executives to ascertain conditions on the roads before awarding contracts. The people commended Mr Gidisu for being the first Minister of Roads and Highways Minister since 1992 to inspect the roads and experience at first hand their problems. Some of the residents told the Ghana News Agency that it showed the commitment of the Minister and government to address their problems. Mr Gidisu also paid courtesy calls on some of the paramount chiefs and opinion leaders in the Region. 05 Sept. 09