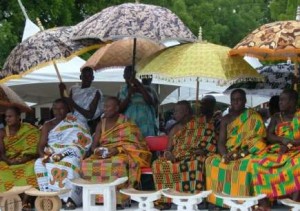 Mr William Addo, Volta Regional Director of the Centre for National Culture (CNC) on Wednesday appealed to government to give attention to the promotion of arts and culture in the country.

He said if a fraction of the attention given to the promotion of football is extended to arts and culture, it would help spice up the country’s tourism sector.

“Our culture determines our value as a nation in the eyes of the world,” Mr Addo said in an interview with the Ghana News Agency in Ho.

He said the arts and culture were legacies bequeathed to us by our forebears, but regrettably successive governments seemed to have placed less value on them.

“When you mention football then the culture of Brazil comes up, fashion calls to mind France and Italy. When you come to Ghana the kente, traditional music, drumming and folklore are what make us distinct in the world. We can nev er be like Brazil in the mind of the world no matter the quantum of investment we put into football,” Mr Addo said.

He said although the whole nation loves the passion and entertainment value of football, people should be made to develop the same passion and value for our indigenous arts and culture.

He regretted that many regional arts and culture theatres began since the 1990s, remained uncompleted and urged government to turn its attention to completing them.

Mr Addo observed that culture is at the heart of human effort and that development without it would render the people disoriented. He said the pride of nations is rooted in the uniqueness of their cultures just as everybody has a unique finger print by which he or she is identified among the billions of people in the world.

“So let us be an authority in our culture and use it to capture the minds and passion of our people,” Mr Addo said.

He said at the moment, many workers from the smaller towns travel to Accra and other big cities every weekend for entertainment and return for work late on Mondays, adding that the trend could be reversed if regional arts and culture centres were reactivated. 16 Feb. 10.