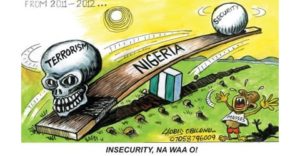 Gunmen mounted on motorbikes killed at least 32 people in the northeastern Nigerian village of Gurmushi, a police source said on Thursday.

The attacked occurred along the Cameroon border area of Borno state, the heart of an insurgency by Boko Haram militants fighting for an Islamic state in religiously mixed Nigeria, on Wednesday afternoon.

On hearing of the attack, Abba Shuwa contacted his family who live in village, he told Reuters by telephone. They said many of the 32 dead had already been buried.