It was a d 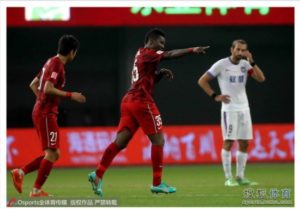 ream debut for Asamoah Gyan as he scored the winning goal for his new club Shanghai SIPG in a league game against Tianjin Teda.

Gyan was named to the bench by Sven Goran Eriksson after only training for a day with the full squad but was called upon at halftime with SIPG trailing to a Hernan Barcos goal.

His entry rejuvenated title chasing SIPG who piled on pressure to get an equaliser from the penalty spot through Davi.

With the game finely balanced,the stage was set for Gyan to grab the headlines,which he did as he opened his account for the Chinese Super League after being fed by Dario Conca in the 80th minute to send SIPG to the top of the league.