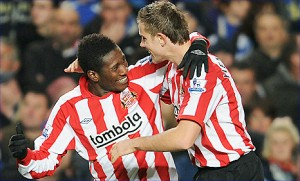 Ghanaâ€™s Asamoah Gyan continued his fine scoring form for Sunderland with a neat finish in the second half to hand Chelsea a 3-0 drubbing at Stamford Bridge- the highest defeat for the league leaders thus far.

Gyan was played through with an immaculate pass from Henderson and with just Cech to beat, the Ghanaian with the inside of his foot slotted the ball past the Chelsea shot stopper.

The visitors had their noses in front in the first half with a superb solo effort by Nedum Onuoha who squeezed past three Chelsea defence men before beating Cech.

Even though Onuoha will be credited for his enterprise and dexterity it was the Ghanaian whose goal bound shot was saved with a finger-tip, coupled with yet another instinctive rebound save by Cech.

He could not for the third time in a split second prevent Onuoha from scoring.

Before that though, Cech had brushed away a teasing curl, and a stupendous header both from man-of-the-match, Dan Welbeck in what should have been the visitors opener.

Danny Welbeck was gifted a silly late goal by Ashley Cole to crown a fantastic day for the Black Cats and a woeful performance by the league leaders.

Chelsea were completely out of sorts and created no clear goal scoring opportunity, a far cry from a side which has scored more than 20 goals this season.

The Sunderland defence marshaled around Bramble was rugged and aggressive giving Drogba and Anelka no breather at all. The best Chelsea had were a number of free-kicks from near post which Drogba missed.

With the absence of Alex and Terry, the Chelsea defence leaked badly and should even be content with the score-line. It could have been embarrassing, if it was not already.