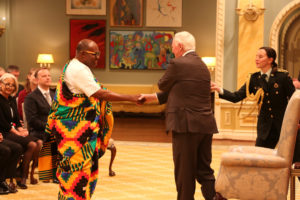 At a simple but impressive ceremony H.E.J Ayikoi Otoo presented his Letters of Credence to His Excellency the Rt. Hon David Johnston at the Rideau Hall in Ottawa on Thursday 31st August 2017.   H. E. J. Ayikoi Otoo was among five other Heads of Mission from Paraguay, Germany, Dominican Republic and Lithuania to present their Letters of Credence on that day.

During the event, His Excellency the Right Hon. David Johnston lauded Ghana’s achievement in sustaining democracy in the country, ensuring participatory decision making in local communities and reducing poverty. He recalled a visit to Ghana in 2013 which made a remarkable impression on him.

In a private meeting, His excellency J. Ayikoi Otoo thanked the Governor General for the long standing cordial relations and sustained co-operation between the two countries. He thanked the Governor General for the support Canada is offering for the “Planting of Food and Jobs programme” and discussed the government’s flagship “One District One Factory” policy. The two also discussed cooperation in the energy sector as well as irrigation. The issue of Canada’s support for Kofi Annan Peacekeeping Centre was also discussed.

His Excellency Ayikoi Otoo was accompanied by his wife Patricia and the staff of the Mission in Ottawa as well as the Consulate in Toronto.