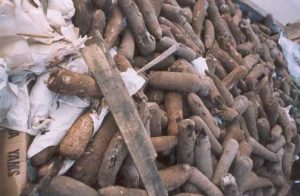 Yams are members of the Dioscoreae family. Depending upon the yam variety, of which there are about 200, its flesh may be of varying colours including white, ivory, yellow or purple while its thick skin may either be white, pink or brownish-black. Their shape is long and cylindrical (oftentimes having offshoots referred to as “toes”) while their exterior texture is rough and scaly. Yams have a very starchy and slippery texture and when cooked, will either be creamy or firm, depending upon the variety. Their taste is earthy and hardy, with most varieties having minimal, if any, sweetness. Specific types of yams include Dioscorea alata (Hawaiian yam), Dioscorea batatas (Korean yam) and Dioscorea esculenta (sweet yam). Protection against Cardiovascular Disease Yams are a good source of vitamin B6. Vitamin B6 is needed by the body to break down a substance called homocysteine, which can directly damage blood vessel walls. Individuals who suffer a heart attack despite having normal or even low cholesterol levels are often found to have high levels of homocysteine. Since high homocysteine levels are significantly associated with increased risk of heart attack and stroke, having a good supply of vitamin B6 on hand makes a great deal of sense. High intakes of vitamin B6 have also been shown to reduce the risk of heart disease.Yams are a good source of potassium, a mineral that helps to control blood pressure. Since many people not only do not eat enough fruits and vegetables, but also consume high amounts of sodium as salt is frequently added to processed foods, they may be deficient in potassium. Low intake of potassium-rich foods, especially when coupled with a high intake of sodium, can lead to hypertension.In the Dietary Approaches to Stop Hypertension (DASH) study, one group ate servings of fruits and vegetables in place of snacks and sweets, and also ate low-fat dairy food. This diet delivered more potassium, magnesium and calcium. Another group ate a “usual” diet low in fruits and vegetables with a fat content like that found in the average American Diet. After eight weeks, the group that ate the enhanced diet lowered their blood pressure by an average of 5.5 points (systolic) over 3.0 points (diastolic). Dioscorin, a storage protein contained in yam, may also be of benefit to certain individuals with hypertension.Preliminary research suggests that dioscorin c can inhibit angiotensin converting enzyme, which would therefore lead to increased kidney blood flow and reduced blood pressure.A Look at Yam, Diosgenin, and Menopausal SymptomsMany consumers have found products in the marketplace that promote wild yam or wild yam extracts as substances that can help provide a natural alternative to hormonal replacement in women who have reached the age of menopause. Many of these products are provided in the form of creams that can be topically applied.Even though the food itself is not usually promoted by natural products companies, these yam-containing products have sparked interest in the relationship between yam and menopause.Yams do contain some unique substances called steroidal ponins, and among these substances are chemicals called diosgenins. Because of similarities between diosgenin and progesterone, questions were initially raised about the ability of our body to convert diosgenin into progesterone, but research has shown that the answer here is clearly no. Diosgenin does, however, have an impact on hormonal patterns in studies involving animals, and may be helpful in lowering risk of osteoporosis, although we don’t as yet have any human studies in this area.Wild yam also has some history of traditional use in herbal medicine, especially Chinese herbal medicine, as a botanical that can affect organ system function. While the focus here has been on kidney function, wild yam (or Chinese yam) has also been used to support the female endocrine system.For example, there has been traditional use of this root in conjunction with lactation. We’ve only seen one high-quality, peer-reviewed research study in which women were actually given wild yam (in the form of a topical cream) to determine the impact of this plant on menopausal symptoms. Although this research showed some very limited benefits from the wild yam cream-and no side effects-none of the symptom changes were statistically significant.In summary, we’d say that there’s no research evidence to support the claim that yam has special benefits when it comes to menopause, but that more research is needed in this area because there is a clear connection between yam, diosgenin, and endocrine function that is not yet understood.Blood Sugar and Weight Control Yams’ complex carbohydrates and fibre deliver the goods gradually, slowing the rate at which their sugars are released and absorbed into the bloodstream. In addition, because they’re rich in fibre, yams fill you up without filling out your hips and waistline. And one more benefit, yams are a good source of manganese, a trace mineral that helps with carbohydrate metabolism and is a cofactor in a number of enzymes important in energy production and antioxidant defences. You’ve just got to hand it to Mother Nature; when she brings forth a food, she makes sure it integrates everything needed to contribute to your health and vitality.Compilation by Teacher Baffour