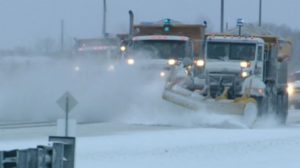 Thousands of residents in Toronto, Canada today call off from work because of a snow storm which hit the area that started from yester night through to this morning.

Schools closed down to ensure students safety at home as their parents take care of them.

The winter snow storm which headed from Hogtowns,Texas dropped 30 centimeters of snow this morning which made it very difficult for movement of vehicles and people who were to go to work.

It was the first major blizzard of 2011 which originated from Texas and hit Toronto as it was scheduled at 2:00a.m this morning and end up around 8:00a.m.

As stated by weather Network meteorologist Chris Scott and reported by the Metro newspaper in Toronto, the area has not seen a storm like this in several years.

What was the unusual spectacle was the thunder, lightening and snow simultaneously which made the Greater Toronto Area Airport to cancel over 200 international flights yesterday when the storm was moving.

The spokesman for the airport authority Trish Krale, has advised anyone traveling to Toronto to confirm the status of his flight before embarking on the journey.

As the Toronto Mayor Rob Ford, expressed confidence that the city staff will tackle the storm, the city’s 600 snow plows, salt trucks hit the main road and express ways when the snow started and now salting them as the snow has taper of.

Meanwhile it has been estimated that 14-16 hours would be spent to clear the snow whiles property owners have to spend 12 hours to clear their side walks after the storm has ended.

Currently the snow plows are on the main roads plowing off the dumped white stuff making way for the fleet of salt trucks to melt the snow to make them motorable.

Stephen A. Quaye a resident in Toronto who monitored the downpour and has filed in this report.

He can be contacted by teemagi2003@yahoo.com.