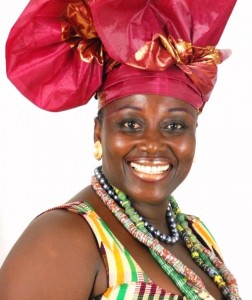 Ghanaians, lets support one of our own â€œMrs. Joyce Akumaa Dongotey-Padiâ€ and nominate her for the CNN Heroes for 2011.

To nominate her, just click here and log on to CNNHeroes.com and nominate Mrs. Joyce Akumaa Dongotey-Padi for 2011 CNN Heroes if you believe in her and all that she is doing to make Ghana a better place.

The world needs to know what she is doing for social development in Ghana.

Mama Zimbi is a two time Arts Critics and Reviewers Association of Ghana (ACRAG) Award winner for her versatility and hard work. In 1999, she received the ACRAG Talent Award for Discovery, for her acting role in Cantata which is shown on the national television, GTV. She was also awarded the most coveted ACRAG Best Female Radio Personality Award in 2008, confirming her title as the â€˜Queen of Talk Showsâ€™ in Ghana. Among the other numerous awards she has won are Miss Yilo Krobo in 1992 and 1996, a Ghana Social Marketing Foundation (GSMF) Best Journalist Award for Adolescent and Reproductive Health in 2001, Miss Obaapa in 2007 and was nominated for the Ghana Showbiz Personality Award in 2004.

Akumaa Mama Zimbi accepted an international accolade when she received the World Innovation Summit for Education (WISE) Sustainability Awards in 2009, an initiative of the Qatar Foundation (QF), chaired by Her Highness Sheikha Mozah Bint Nasser Al-Missned in Doha to support her Widows Alliance Network (WANE) for sustainable economic development in Ghana. Mama Zimbi, now a WISE Sustainability Laureate of the QF, received the prestigious accolade alongside five others at the plush Sheraton Hotel in Doha. Miss Sheetal Mehta of India, Martin Burt of Paraguay, Peter Levy (USA), Vicky Colbert (Columbia) and Delio Morais from Brazil were the other five recipients.

This amazing Christian Mother of the Catholic faith is also is the C.E.O of Zimbid Concepts, a media production house with a focus on the propagation of womenâ€™s human rights using the power of the media and education. They are also involved in customer service consultancy, match-making, television production and event management. She is also the Founder and Executive Director of Mama Zimbi Foundation (MZF), a non-governmental organization which seeks to empower and support widows (Widows Alliance Network), provide home and future for abandoned children and orphans (Akumaa Childrenâ€™s Home), and also involve in the issues of adolescents (Adolescents Sexual Reproductive Health).

She is the host of Ghanaâ€™s number one radio talk show on Marriage, Love and Sex, â€˜Odo Ahumasoâ€™ on Adom 106.3 FM. Though, she is the host of the superb TV talk show â€˜Akumaa Mama Zimbi Showâ€™, she is also a columnist in the widely circulated weekly newspaper in Ghana called Weekly Spectator. So far, she has featured in 5 prominent films which includes the first Ghana-Nigeria movie collaboration, â€˜The Lost Hopeâ€™, â€˜Accra Killings,â€™ and â€˜Two Troubles, One Godâ€™. The first movie she featured in was â€˜I Want To Be A Womanâ€™ where she played the lead role as a hermaphrodite. She is a regular feature on the most popular family sitcom on TV3, â€˜Efie Wuraâ€™. Mama Zimbi is a proud member of Ideal Dream Team (IDT), Ghana Actorâ€™s Guild (GAG) and Ghana Journalist Association (GJA).