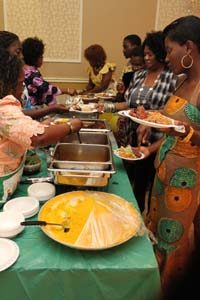 The celebration of Ga-Dangbe Homowo in Toronto-Canada this year will go into the history books as a great event which united Ghanaian-Canadians.

Elegantly and gorgeously dressed chiefs and queen mothers as well as members from all tribal and religious backgrounds saw both Ghanaians and non Ghanaians coming together to share a common belief, values and attitudes.

The moment of unity came when both chiefs, queen mothers, dignitaries and invited quests including white Canadians as well as members got to the floor at the Luna Ball Room to exhibit their great skills in dancing to fine tune of Ghanaian song “WO GBE GYEKE” to wit we have come that far.

It was really refreshing and admiring seeing Ghana’s Consul General in Toronto Mr. John Bosco Kpebasa, doing the Homowo “jump up” dance to the song “wo gbe gyeke” in the long and thick circle as it is always done.

At the other part of the circle were the Member of Parliament for Tema East Daniel Nii Kwatei Titus-Glover, The Chairman for the NPP-TORONTO CHAPTER, Mr. Christian Akyeampong, and his vice Mr. Yaw Banning and former chairman of the chapter Mr. McDonald Agbenyor also doing the jump up dance with smiles.

Addressing the gathering, Mr. John Bosco Kpebasa, said the Homowo festival is significant as it teaches a lot of virtue that all needs to impact on the youth, especially the second generation who are increasingly being influenced by bad peer pressure to join gangs, commit murder and indulge in all sorts of social vices.

“ It is pertinent for all of us to live and practice the cultural beliefs and value systems which guide us against undesirable practices such as murder, rape, homosexuality, incest, disrespect for the elderly and immoral acts, that are a taboo and being frown upon by the gods and ancestral spirits” he advised.

Accordingly, this delinquent behaviour could lead to disastrous consequences therefore charging all to impact the cultural values in the youth who are drifting apart, in a bid to turn around their lives for their own good.

The Consul General urged both the organizers and the participants to use the annual Homowo festival celebrations in Toronto as opportunity to mobilize themselves and raise funds for community works, finance critical projects back home to put their image on the map of caring associations in the diaspora.

Earlier addressing the gathering, Titus Glover, observed that what identifies the people of Ga and Dangbe are the language they speak and the culture that puts them out as a unique people.

He called on the people of Ga’s and Dangbe’s who have acquired rich knowledge and skills in their professions to repatriate and take advantage of the opportunities in Ghana.

Accordingly, his first term in parliament has been greeted with a lot of good works in his constituency of which the electorates will show their appreciation by retaining him as their representative in parliament come 2016 general elections.

Titus Glover hinted that when it comes to parliamentary proceedings, there are no tribal differences but one people seeking the development of the country.

He urged all the chiefs and people from Ghana in the diaspora to unite as one people to fight for development back home.

Homowo which literally means hooting at hunger, is a festival celebrated to commemorate the day when hunger was defeated it was learnt.

The celebration signifies victory over hunger that was made possible by the resolve and tenacity of purpose to turn a difficulty situation of famine and hunger around.

As a mark of appreciation, the Homowo festival is celebrated annually with various rituals including sprinkling the traditional food ”KPOKPOI” amid street procession, traditional dancing and merry making to thank God and seek spiritual protection and blessing.