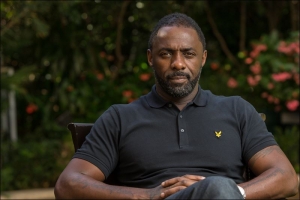 Prominent British actor Idris Elba will  be shooting some scenes  for a movie project while visiting Ghana.  He is working on a project with Red Crown Production, titled Beasts of No Nation which is based on a novel  written by Uzodinma Iweala and being directed by Cary Fukunaga.  The movie is being shot  in some interesting locations in Ghana at Koforidua,  Takoradi and others.

The story “Beasts Of No Nation”  follows the journey of a young boy, Agu, who, when civil war engulfs his West African country is forced to join a unit of mercenary fighters. Not only must Agu face the death of his father and disappearance of his mother and sister, but must also join a life of violence and brutality. Agu befriends a mute boy named Strika and together they face the crimes and hardships of war.

Elba plays the lead role of Commander and he will serve in a producing capacity as well. Elba joins Red Crown Productions’ Daniela Taplin Lundberg and Riva Marker, Parliament Of Owls’ Cary Fukunaga and Primary Productions principal Amy Kaufman as producers on the film. Daniel Crown and Bill Benenson will serve as executive producers. Red Crown is funding the film.