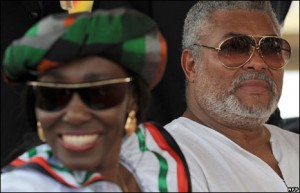 Stories of identity fraud have dominated the international media and indeed the crime has been at the heart of internet fraud, known locally as â€˜sakawa.â€™

The latest revelation made by Joy FMâ€™s Kobby Graham is a tale of internet fraud taken to another level.

A user posing as former president Jerry John Rawlings on the popular social networking site Twitter could easily deceive a visitor and lead them into thinking that Mr Rawlings is an interesting subscriber to the platform.

Twitter is a free service that lets you keep in touch with people through the exchange of quick, frequent answers to simple questions.

A few days ago, a web address (twitter.com/jjrawlings) mysteriously showed up on several Ghanaian websites.

Clicking on the link leads internet users to a slick-looking website with messages supposedly written and posted by former Rawlings.

The messages are posted on a background featuring a picture the former president recently took with Nelson Mandela.

The messages are short and humorous in tone, poking fun at the likes of ex-President Kufuor, Kwesi Pratt and former Chief of Staff Kojo Mpiani, who is chided for falling ill after only two days of questioning by the Bureau of National Investigation.

However not everyone is amused and the ex-Presidentâ€™s Spokesperson, Kofi Adams said the former president has no knowledge of the website.