Barry, who appeared to cramp up during the shootout, denied fellow keeper Brimah Razak – one of five efforts missed – before slotting in the winner.

Victory gave the Ivorians their second title, in a repeat of the 1992 final.

That year, Ivory Coast won 11-10 on penalties also after a goalless draw.

They will be delighted to have emulated the feat having gone close twice since – in 2006 and 2012 – on the latter occasion losing to Zambia, who were then coached by current Ivory Coast coach Herve Renard.

The Frenchman’s success as coach of the Elephants makes him the first man to win the title with two countries.

By contrast, Ghana coach Avram Grant has now suffered defeats on penalties in two major finals, having lost the 2008 Champions League to Manchester United when he was Chelsea boss. 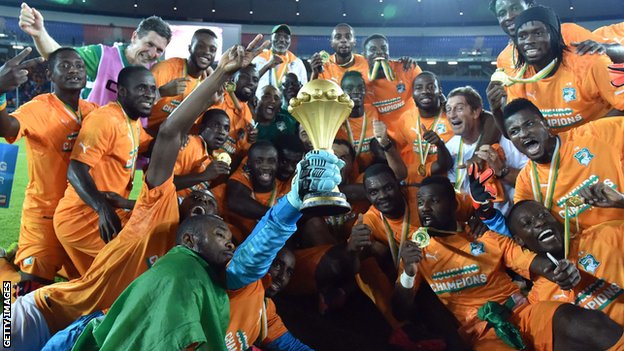 It had looked like the Black Stars might end their 33-year wait for a fifth Cup of Nations title when Ivory Coast missed their first two spot-kicks – Manchester City’s new signing Wilfried Bony hitting the crossbar and substitute Junior Tallo dragging wide with his first touch of the game.

But Afriyie Acquah and Frank Acheampong failed with their efforts for Ghana and the sides were back on level terms.

After every outfield player had taken his turn, Barry – who had annoyed some of the Ghana players by going down with cramp – brilliantly saved keeper Razak’s effort. He then kept his composure to slot home before being mobbed by his team-mates.

Defeat was perhaps a little harsh on Ghana, who had the better of the chances in the scoreless 120 minutes that preceded the shootout and twice hit the woodwork.

Christian Atsu was unlucky to see a superb 25-yard shot come back off the keeper’s left-hand post, while Andre Ayew struck the outside of the other upright from a tight angle.

But there there was a sense of inevitability throughout the match that it would go the distance as neither team appeared to be prepared to take the risks that might bring a victory.

The big names – Ivory Coast’s Yaya Toure and Bony, and Ghana’s Ayew and Asamoah Gyan – failed to have a decisive influence on a game that never really flowed.