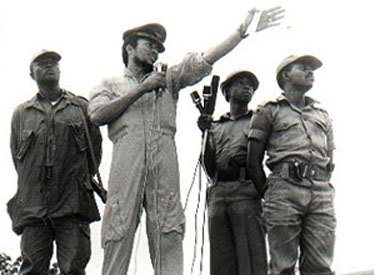 A wreath-laying ceremony was Friday morning held at the forecourt of the Golden Jubilee House (Flag Staff House) to mark the 31st anniversary of the June 4 Uprising.

Prayers were said for the continued growth of the nation and its leaders, while cadres chanted songs telling of the permanence of the â€˜Revolutionâ€™.

Among those who attended the ceremony were the Interior Minister, Martin Amidu; First Deputy Speaker of Parliament, Doe Adjaho; Minister of State at the Presidency, Nii Laryea Afotey Agbo; Deputy Agric Minister, Nii Amasah Namoale; National Chairman of the NDC, Dr. Kwabena Adjei; former Army Commander and one time ECOMOG Commander, General Arnold Quainoo (retd) and a host of cadres and membes of the 31st December Women’s Movement who defied a heavy downpour.

Wreaths were laid for those who fell in the uprising and for the ideals of the revolution, while General Arnold Quainoo (retd) lit the perpetual flame.

Other activities to mark the occasion in the capital were to continue at the Kaokudi Park while the Northern Regional capital of Tamale, would host a rally to be addressed by the leader of the uprising, ex-President Jerry Rawlings.

Speaking exclusively to the Daily Graphic, President Atta Mills siadÂ he respected the fact that June 4, as a historic landmark, was acknowledged in the constitution of the National Democratic Congress (NDC), stressing that “it was not enshrined in the party’s constitution because we seek to glorify the excesses to which sometimes things went”.
“In fact, beyond the excesses, there are lessons and constant reminders to those who serve in public positions,” he added.

President Mills said the connection between June 4 and the NDC was, therefore, not just because the key personality in the 1979 uprising, Flt Lt Jerry John Rawlings, was also the founder of the NDC but because of the principles of probity and accountability which it brought to the fore of Ghanaian politics.

“Of course, as former President Rawlings himself once said, ‘June 4 did not invent probity and accountability’. What it did was to register it in much stronger terms in the nation’s body politic,” he said.