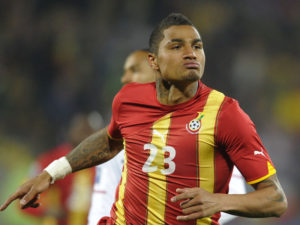 Rustenburg, June 28, GNA – Ghana’s midfielder, Kevin Prince Boateng, will be available for the next match against Uruguay.

Boateng could not complete last Saturday’s game against USA as a result of injury and there were fears about his possible absence in the next game, but coach Milovan Rajevac seems to have allayed that fears. Boateng, who fetched Ghana’s first goal against the USA, was replaced by Stephen Appiah after he suffered a thigh injury in the game. The tireless midfielder is expected to join his colleagues at training on Monday afternoon as they prepare for the game against Uruguay. Head Coach Milovan Rajevac told a Press Conference on Sunday that the medical team was working seriously on the player and was convinced that he would be available for the next game.

The coach said Boateng took a knock in the game against Germany and had to be aggravated in the last game, but said the player will get better in the next few days for the game against Uruguay.

He praised the player for exhibiting a lot of professionalism and tactical discipline and has adjusted so well into the set up. “Boateng is an excellent player, very competitive and contributes a lot to the team and I hope we have him back for the Uruguay game”.