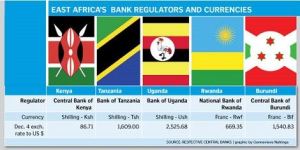 According to Reuters, the Central Bank of Kenya said the East African Payments System (EAPS) will speed up the process of commercial transactions in real time. Rwanda and Burundi will be expected to join the EAPS in the coming days.

“The EAPS is a step towards the creation of a monetary union within the East African Community (EAC) trade bloc. Member countries have aimed at establishing this monetary union over the next 10 years,” the Central Bank of Kenya said.

Each member state currently has its own banking payment systems, where cross-border transfers take up to two days.

Banking executives from east Africa have pointed out that member states will first have to implement the free movement of labour, goods and services for the EAC to get a common currency.

These economies will also have to meet certain macro-economic criteria, which includes capping inflation at five per cent and keeping fiscal deficits (excluding grants) below six per cent of the national output, before embarking on a monetary union, Reuters reported.