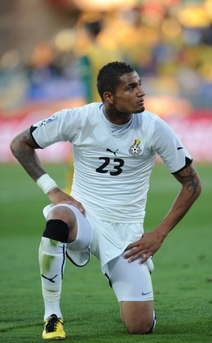 RUSTENBURG, South Africa (AFP) – Kevin-Prince Boateng has revelled in his ‘ghetto kid’ image in the past but he will need all his streetwise skills when the Ghanaian midfielder comes up against the country of his birth Germany in their final World Cup Group D match on Wednesday.

The 23-year-old Portsmouth player is persona non grata back in Germany ever since his brutal tackle on German captain Michael Ballack in the FA Cup final ruled the then Chelsea star out of the tournament.

Boateng, who played up to under-21 level for Germany before swearing allegiance to the country of birth of his father, did apologise over the incident but to no avail as far as a distraught and furious Ballack was concerned.

“It was all I could do,” said Boateng, who went on to miss a penalty in the final after the incident which saw Chelsea win 1-0.

“I was late with the tackle. I apologised twice while he was still receiving treatment on the pitch, this is the third time.”

However, despite his apologies there has been little sympathy for him back in Germany and even his half-brother Jerome – here with the German squad but unlikely to feature in the match itself – said he wanted no further contact with his older sibling.

Jerome on Monday called for calmer minds to prevail, though he still has no intention of talking to his half-brother.

“He remains my brother and I wish him the best, but at the moment we have nothing to say to each other, that happens in other families as well,” said 21-year-old Jerome, who is set to make his English Premier League debut next season with Manchester City.

Germany’s general manager Oliver Bierhoff has also tried to calm tempers ahead of the encounter.

“We mustn’t lose our cool,” said Bierhoff, who scored in Germany’s Euro ’96 triumph over the Czech Republic.

“We will not be playing against Kevin-Prince Boateng, but against Ghana. He must be treated with fair-play.”

Ghana’s impressive Serbian coach Milovan Rejevac has said that his intention was solely to prepare him psychologically for the match.

To date Boateng has shown little sign of requiring any such help as he has impressed in Ghana’s opening two matches – the 1-0 win over Serbia and the 1-1 draw against Australia – and has kept the Inter Milan star Sulley Muntari out of the side, much to the annoyance of the latter.

Rajevac has been delighted with the manner in which Boateng has fitted into the team while Asamoah Gyan, the scorer of both their goals so far, goes further.

“We are happy to have him in the team where he has quickly imposed himself as a key man,” said Gyan.