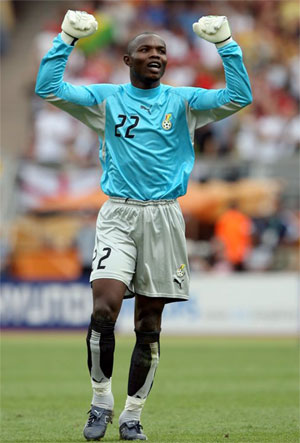 Black Stars goalkeeper Richard Kingson is tasking other experienced players in the Ghana squad to set the trend for the youngsters to follow.

Ghana is expected to line up the youngest squad at the African Cup of Nations when the competition kicks off next weekend in Angola.

Eleven of his called up 23-man squad will be making their CAN debut when the competition begins as injuries have denied Ghana some regular and experienced players for the tournament.

But Kingson, who brings a lot of experience to the team as he makes his fifth Nations Cup appearance told KickOffGhana.com that the established stars in the team need to play key roles.

â€œThe injuries have been unfortunate, but we have to carry on. In the current situation some of us will have to play really big roles because of our experience at this level and I am happy to do that,â€ he said.

The 31-year-old shot-stopper arrived Friday from his base in Wigan as Ghana head into the final days of preparations before departing for Cabinda, their group base in Angola.

Ghana’s Nations Cup campaign which kicks off on January 11 against Togo in Group B has been hampered with injuries to key players.