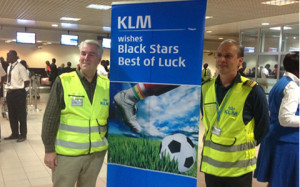 KLM Royal Dutch Airlines has sent goodwill message to the senior national football team, the Black Stars, as they prepare for the 2014 edition of the FIFA World Cup.

The event is to be staged in Brazil from June 12 to July 13, 2014. This will be the third consecutive appearance for the Black Stars at the football tournament held every four years.

The team starts its preparations for the World Cup with a friendly game against the Dutch national team to be played on May 31, 2014 in Rotterdam.

KLM is expected to fly the team after the game in Rotterdam to the United States where the team will train and play another friendly game before leaving for the their base in the Latin American country.

“We are happy they chose us again. We flew the Black Stars contingent to the 2006 World Cup in Germany. We know them and they know us, and that is very exciting. We wish the team all the best,” Mr. Axel Metselaar, Country Manger for KLM said.

Mr. Kwesi Nyantakyi, the President of the Ghana Football Association (GFA) said the Association is comfortable with the service provided by KLM.

“We have been using KLM for our travels not only for the World Cup but for all our travels within Europe. The reason is that most of our business destinations are places that you can use KLM to travel to and most of the players are in countries that KLM flies to. Holland is centrally placed and is easy to travel to many countries from Holland.

Going to camp in Holland, going to America, and going to Brazil all with KLM is very convenient for us. We have used KLM for a long time so we have become loyal customers of KLM. Unless something untoward happens for us to change, it will be difficult for us to switch to another airline,” he said.

He added that: “We are very comfortable with their products and services.”

KLM, which is a member of the SkyTeam, was the official airline of the Black Stars during the 2006 World Cup held in Germany.