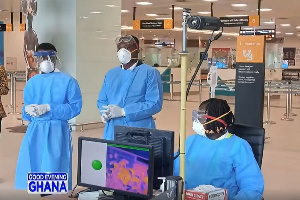 While several Ghanaians have doubted the country’s level of preparedness to face the spread of the coronavirus (COVID-19), a British cabin crew member has expressed satisfaction with the control mechanisms at the Kotoka International Airport (KIA).

In a British radio interview replayed on Good Evening Ghana, the crew member insisted that even though Ghana is a third world country, the mechanisms available to avert the spread of the virus at KIA is not available at one of the most popular airports in the world, London’s Heathrow airport.

“I work for an airline on cabin crew and I just got back from Accra in Ghana. When I got to Accra on Saturday night, they had everything laid out. I thought I was in a surgical ward and that’s supposed to be a third world country. They took our temperature, they did everything…” he explained.

He expressed his disappointment in not finding even a customs officer at the Heathrow airport in London screening travellers.

“I went to Accra on Saturday, I came back to Heathrow this morning at 5:30, I walked through Heathrow and not even a customs officer…but when I was in Accra, people were lined up being tested. Now if that’s a third world country doing their bid, then I’m shocked…” he explained in disbelief.

Though the host objected the idea behind checking temperatures at the airport with reason that it couldn’t guarantee safety, the crew member insisted that the level of professionalism and seriousness officials attached to the screening was incomparable.

“It was amazing to me that the Ghanaian officials were so on top of it…” he said.

Already, the United Kingdom has recorded over 373 cases of the coronavirus but Ghana together with some African countries have not recorded any of such cases yet.

Since the outbreak of the disease, officials at the Kotoka International Airport have been on high alert. President Akufo-Addo has also given assurances that his government will, in the coming days, do its best to avert the spread of the disease in Ghana.