Ghanaian Fifa coaching instructor Ben Koufie has launched a scathing attack on those who have called for the exclusion of Stephen Appiah from the Black Stars.

The former Ghana Football Association boss says those commentators who have expressed that view have got an agenda to destroy the national team. 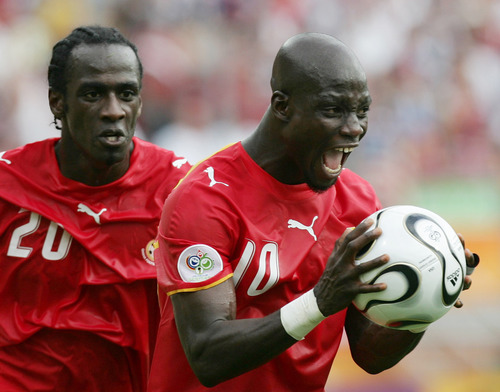 The Black Stars take on Benin on Sunday in the World Cup and Appiah is leading the team to hit the ground running in the Group D game. Koufie, a respected brain in African football, says Appiah is a priceless asset to the national team even though he is club-less.

“Those who have made that call have got a wicked agenda not only against Appiah but against the entire country,” Koufie told Ghanasoccernet. “Those who are making that argument have no knowledge of the game and they have got some other evil interests.

“Appiah has shown on the field that even though he doesn’t have a club he is our most important player as we saw in the game against Egypt. “In Egypt and in many games he has been without a club but has shown that he is our best performer therefore those making that call have got an agenda.

“For his qualities on the pitch, his massive leadership qualities â€“ the best in Africa â€“ and for his services for Ghana if you won’t praise him don’t destroy his good name.” Koufie, who has been tasked with reviving several national teams across Africa, added that Ghanaians must rather support and pray for Appiah to resolve his club career.

“As good Ghanaians we should rather be praying for him to have a club soon,” Koufie said. “Appiah has done many things in the history of Ghana football that has not been done before and bodes well for the future captains of the team.

“The example he sets on and off the field must be recognised and any effort being done to bring him down must be resisted by all of us who want Ghana football to prevail.”

Appiah has reunited the national team which was ravaged by various factions in the past and led the country to its first World Cup. While in the past, when Ghana did not have apparel sponsors some players complained about the quality of jerseys, Appiah spent his own money to buy jerseys for the national team.