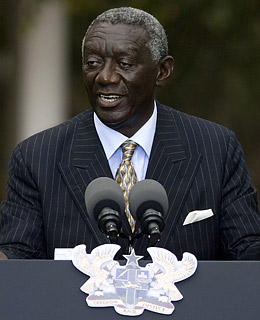 NAIROBI, Kenya, Nov 28 â€“ During his eight-year tenure, President John Kufuor quadrupled Ghanaâ€™s economy. He belongs to an elite group of African leaders who have left a legacy of tangible achievements.Ghanaâ€™s economy grew from 2.6 billion pounds in 2000 to about 11 billion pounds by the time he retired last year while poverty rates were reduced by half. He also created an education system that realised a remarkable increase of primary school enrolment.

He recently visited Nairobi where he held meetings with President Mwai Kibaki and Prime Minister Raila Odinga. During his trip, he spared time to grant Capital News an exclusive interview.

Q. What was the driving force in your outstanding leadership?

A. The rationale for being in politics as far as I am concerned is to try to better the conditions of your society or the people you purport to lead. So when I got the chance, I went to great lengths using some of the best advices from any leader who could come by to try to make the economy work for the people. Of course in current times, human resource development is education and I believe in equality of opportunities. We adopted policies and we reformed our education system to let all children of Ghana have the right to education.

Most of all my belief is that you go into politics to serve your community to make it better. So in a space of eight years as President, my government managed to move the economy. This led to the introduction of free and compulsory universal basic education for all children from age four to age 16.

We ended again with a good fortune of striking oil in very commercial quantities for Ghana, I couldnâ€™t ask for more.

Q. How did you manage to contain any political upheavals after striking oil, as has been witnessed elsewhere in Africa?

A. Naturally, where there is oil or money, there tends to be politics but the oil is yet to be pumped so I didnâ€™t see the worst aspects of politics around oil. Again my government tried to lay frameworks and policies that would ensure that the revenues accruing from oil will be then for the entire country for everyone to benefit not just some group of people or some hidden forces within the community. We also tried to initiate policies to use the oil to further industrialisation of the economy. We wouldnâ€™t use it just commercially, selling crude oil for the money, No! We want to add value to the soil of Ghana, to generate employment and also increase knowhow of people and build more confidence in the people.

Q. What is your advise to other African leaders?

A. I would urge the political classes to be tolerant; tolerance is a big virtue in all human affairs, but more so in the political leadership and governance. Especially if across the border everybody is exercising democracy then they should know that democracyâ€™s central virtue is tolerance, as you want to express yourself and opinions. Allow people to express themselves, make decisions through dialogue.

Q. What challenges is Africa facing and how can we overcome them?

A. Africa has been disadvantaged from way back through the colonialisms, slavery and then some of the geographical issues like arid lands. We have suffered hunger, disease, illiteracyâ€¦. just too many things. Fortunately now all the countries of Africa are independent and through the African Union we are all seeking to unleash the worth of Africa which is a mess. If we are talking about mineral wealth, I donâ€™t think there is any continent you can compare with Africa, and now oil is gushing out and yet we have so many places on the continent living in abject poverty. We have got powerful rivers that could be harnessed for energy to supply the whole of Africa and beyond but most of the places are in darkness. We can use energy for industrialisation. Now I know that all the countries are determined but we begin to start unleashing our worth to better our conditions and also to enable us to interact with other races of the world on equal footing. Of course the African Union is trying to get leadership and also the private sector of Africa is beginning to shape up and can face anyone in the world.Â  Governments should support the private sector to help create wealth, then Africa will become the owner of the God-given worth that the continent has in abundance which so far has not been used for the benefits of us first before our partners.

Q. Will you write a book, or how do you plan to transfer your leadership skills to future generation?

A. I am trying to set up a centre in Accra for the study of leadership, governance and development. It will be a centre of study, research and of writing and inviting people with information and experience and track record to come and share views and in the process I also hope to come and sit not only to do my biography but to also write something on leadership, governance and development and put down my views on this matter. I will be able to share my ideas and values.

Q What have you been doing since you retired as President of Ghana?

A. I am trying to resettle myself but I have been flooded with invitations internationally. The past ten or eleven months since my stepping down from my presidency, practically I found myself accepting to some places outside Ghana, it is part of this that I am here on the invitation of the World Food Programme (WFP) to observe what Kenya is doing with the programme here, creating food security, school feeding programmes. I am engaged with WFP to see how I will be enabled to advocate for more support internationally to help our continent.