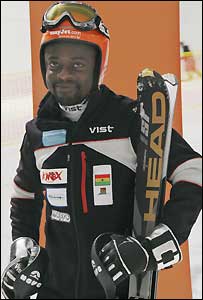 Kwame Nkrumah-Acheampong, nicknamed the Snow Leopard, is on the prowl for a gold in the 2010 Winter Olympic games.Â  He has drawn a lot of interest as an African skiing in the Olympics after his introduction to snow 5 years ago.Â  The Alpine Slalom race is scheduled to take place on February 27, 2010.Â  He will make history as the first Ghanian skiing in the Winter Olympics.

Quite the athlete, he also represented Ghana in the West African Student Games in tennis.Â  Kwame took ski lessons when he got a job as a receptionist at a ski center.Â Â  In an interview with BBC, he stated that , â€œThe only thing we [Africans] have to overcome is the cold.â€Â  He credits his family and his faith in God for his success.

Dedicated to encouraging Ghanian youth to ski, he has set up the Ghanian Winter Olympic Association and is working on building an artificial ski slope in Akuapem Hills, Mamfe, Ghana.

He supports Sabre, a British charity that builds schools in deprived areas of Ghana, and donates his spare money to a charity that is working on help save the snow leopard from extinction.

To cheer him on watch the Winter Olympics on February 27, 2010 and let us see if he brings the Africaâ€™s first gold in this yearâ€™s Winter Olympics