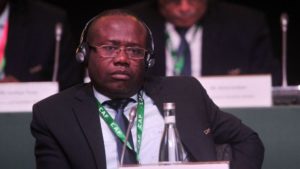 Embattled former Ghana Football Association President Kwasi Nyantakyi has stepped down as Vice President of the Confederation of African Football.

This comes days after announcing his resignation as GFA President after he was seen on camera receiving a cash gift of $ 65,000 which is against the rules of the Association.

Kwesi Nyantakyi’s conduct in the video had him attract a 90 day ban from World Football governing body FIFA and would not be available for Wednesday, June 13th world cup bid vote.

Meanwhile, the owner of Wa All Stars has denied any wrongdoing and says he was scammed by a group of fake investors, who were Tiger Eye PI’s under cover journalists.

“In the said report I committed a series of errors of indiscretion. I gravely associated the highest office of the land –the presidency- with private discussions I had with “Scammers” who deceived me into thinking they were genuine persons interested in investing in our country,” he stated in his resignation letter.

However, CAF will host an extraordinary Congress to replace Ex- Ghana FA boss on the FIFA Council on September 30.

At the moment all football activities in Ghana has been halted due to the massive rot uncovered in the country’s most beloved game.