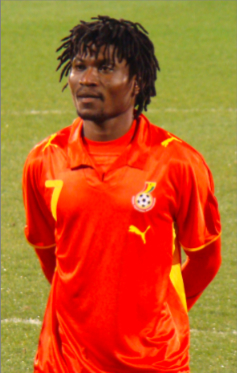 Ghana midfielder Laryea Kingston was prevented from physically assaulting coach Milovan Rajevac after he was axed from the Black Stars final 23-man squad for the World Cup next month.

But the Serbian manager was not spared the verbal attacks of the midfielder after his axing from the final squad on Saturday, accusing the tactician of being a bad coach.

An incensed Kingston had to be held back by the vice president of the Ghana FA Fred Pappoe as he went for the coach with an arm raised and a fist clenched.

But Kingston verbally attacked the cowering coach repeatedly with in a very loud and angry outburst, an insider told MTNFootball exclusively.

â€œI swear to God you are not a good coach. You donâ€™t know anything about football, you stupid man!,â€ Kingston yelled in the foul-mouthed explosion which last over five minutes.

Kingstonâ€™s exclusion has shocked fans because he was tipped to make the final squad after missing the 2006 tournament because of suspension.

The axing of the former Scotland-based midfielder compounds his misery after his contract with Hearts was not renewed.

The Ghana FA had warned dropped players against violent recriminations in a letter they signed last week, promising to be of good behaviour when they are left out.

But Kingston seems to have followed in the footsteps of Baba Armando who accused officials of taking bribes from players before the final squad for the 2006 World Cup was named.

Armando has since not been invited and it looks likely that like Francis Dickoh, who verbally abused coach Claude Le Roy after he was left out of the 2008 Africa Cup of Nations squad, Kingston will not be entertained in future assignments.