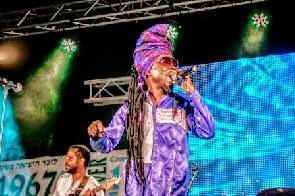 Kojo Antwi, ‘The Maestro’ as he’s affectionately called has once again indeed proven to be a world music icon of Ghanaian heritage when he dazzled thousands of fans in the ‘Holy Land’ of Israel over the weekend.‘The Maestro’ joined the Hebrew Israelite community of Dimona as they celebrated their annual ‘New World Passover’. A season celebrated to commemorate their arrival at the shores of Israel after the group left America in the 1960’s, where they felt captive.Kojo Antwi’s visit to the ‘Holy Land’ was upon a distinct invitation from the leader of the Hebrew Israelite community, His Excellency Ben Ammi Ben.Despite the short notice and the absence of his own band, Mr. Music Man as he’s also known, still displayed his craft and thrilled the community with his unique blend of Ghana’s highlife, Africa’s Soukous, Caribbean lover’s rock, a splash of Afro-American soul and R&B.He was the only Ghanaian artiste among the few artistes from all over the world to perform at the two-day celebration. Aside his performance, Kojo Antwi also took time to interact with indigenes and visited the various Biblical sites in Jerusalem and round the community. “I was fascinated by the culture of the people and the various biblical tourist sites. It was a life changing experience especially my time with the leader. It was very deep. My relationship with them has become more intimate. Dimona has become a second home now”.He also added that there are plans underway to host his own concert in ‘The Holy Land’ of Israel very soon.In a related development ‘The Maestro’ is reported to be putting finishing touches to a joint with Daddy Lumba to serve Ghanaian music lovers with their first ever collaboration.He also disclosed that Nigerian artiste; J Martins is featured in his upcoming album which is slated for release sooner than later.When asked if he has any plans of retiring, the Maestro had this response; “When it comes to creativity, you can’t retire. You will do different things at different times, different stages but I believe they will come a time when I’ll be doing a lot of free shows. Because I’m getting to a point where I’ll just mount the stage and perform for free. It’s not all is about money….” He also urged all Ghanaians to tune in and keep listening to BREEZE 90.9 FM his new radio station.